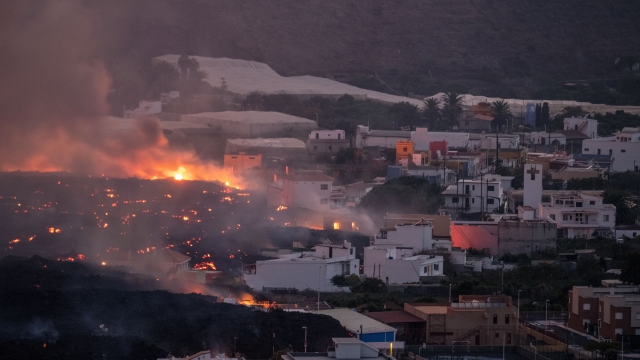 Hundreds of people were evacuated during the night on the Spanish island of La Palma as a river of molten rock crept deeper into a coastal town during a protracted volcanic eruption, authorities said Thursday.

A total of around 7,500 people have been forced to flee since the Cumbre Vieja began erupting more than a month ago. Scientists say the eruption could go on for three months.

The tension of not knowing whether the slow-moving molten rock would entomb their homes, farmland and businesses is taking a toll on local people, Rodríguez said.

"There is already a certain degree of despondency and desperation, waiting for the volcano to subside," he said.

Though most of the island of 85,000 people off northwest Africa is unaffected by the eruption, part of the western side has seen the lava ruin livelihoods and destroy homes.

The molten rock has covered more than 2,100 acres and crushed or damaged around 2,185 buildings.

The volcano's constant roar and numerous earthquakes have also kept locals on edge. The National Geographical Institute counted 38 quakes since midnight, the strongest recording a magnitude of 4.3.

The economy of La Palma, part of Spain's Canary Islands, is based mainly from tourism and banana plantations. The Spanish government has pledged millions of euros to help rebuild damaged infrastructure.