Hundreds March In Minneapolis Ahead Of The Trial Of Derek Chauvin 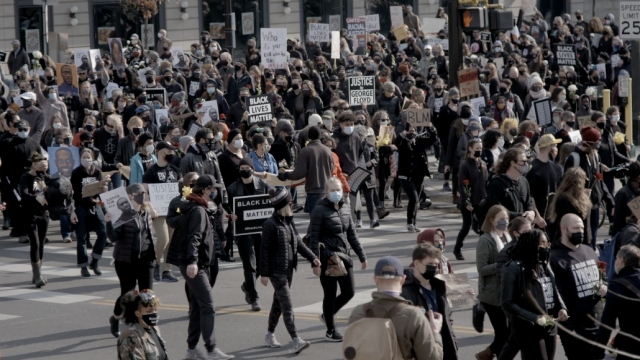 Protesters demanding justice for George Floyd say the city of Minneapolis needs to come together to hold law enforcement accountable.

"Today for this silent march for justice, demanding justice for George Floyd," said Nekima Levy Armstrong, a civil rights attorney. "I wish it was for more positive reasons, but we know that we are living in an environment that unfortunately at times has been racially hostile."

"We are stronger in numbers and I think we are just here to show the state and really the whole world is watching this situation and so it's important for us more than ever to just band together and show love and show support for one another," said Erikka Ryan, Director of diversity, equity and inclusion for the Minnesota State Bar Association.

"We are hoping that they will make the right decision in prosecuting Derek Chauvin and the other three. So that's what we are hoping for," advocate Selena McKnight said.

"The knee on his neck gave such a visual to what the African American experience has been in this country, that I think for the first time people couldn't look away and they couldn't look the other way," Pastor Brian Herron of Zion Baptist Church said. "Well Minneapolis has this pretense of being a liberal city. But there is a dangerous undercurrent of racism that exists and it is surfacing.

"I think a lot of people are at the point where we recognize there is issues and it's kind of at the 'now what?' And I'm just hoping that going forward that when changes are made they're actually listening to the black community about what we want and we value, and not just making diversity and equity a check box," Ryan said.

"So my prayer is, is that there would be a collective coming together and that we would really be able to engage our elect-eds with a power that moves them to legislation that really cares about the people, recognizes the humanity of the people and begins to address the disparities that exist in this city," Herron said.