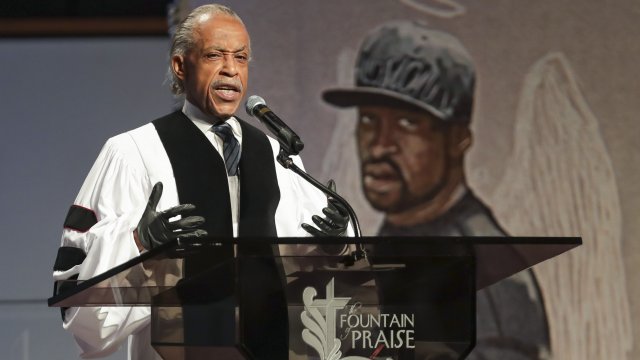 After services in Minnesota and North Carolina, hundreds gathered in Houston, Texas, to honor the life and tragic death of George Floyd one last time.

About 500 people attended the private service, including politicians, celebrities and the families of other victims of police brutality, including family members of Michael Brown, Botham Jean and Eric Garner.

"These laws need to be changed. No more hate crimes, please. Someone said 'make America great again,' but when has America ever been great?" Brook Williams, George Floyd's niece, said.

The Rev. Al Sharpton gave the eulogy for the services in Houston and Minneapolis. In both, he spoke to the tragic nature of Floyd's death and the bigger problem it represents.

The presumptive Democratic presidential nominee, Joe Biden, met with and offered his condolences to Floyd's family Monday. He also recorded a video message that was shown during the funeral.

"We can’t turn away. We must not turn away. We cannot leave this moment thinking we can once again turn away from racism that stings at our very soul,” Biden said.

Floyd's death at the hands of Minneapolis police on May 25 set off an unprecedented series of national and international protests in the name of ending police brutality and bringing about racial equity.

In the aftermath of Floyd's death, all four officers involved in his arrest have been charged, including Derek Chauvin, who put his knee on Floyd's neck for nearly nine minutes.

Just a few miles from where this service took place, George Floyd will be buried next to his mother, who he called out to during his last moments.