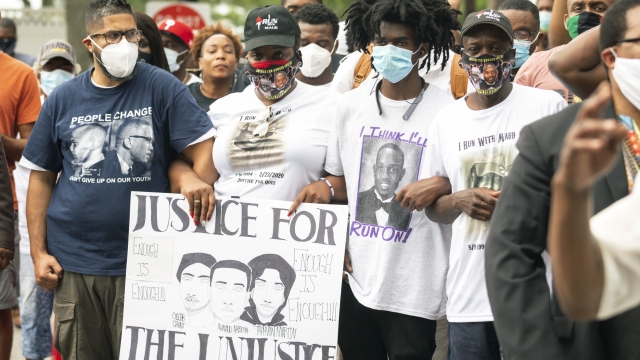 Hundreds of people showed up for a rally over the weekend in honor of Ahmaud Arbery, the Georgia black man who was killed by two white men while jogging.

On Saturday, several black rights groups and civil activists rallied in Brunswick, Georgia to demand justice for Arbery – who was unarmed and shot and killed in February while jogging through a neighborhood.

Rallygoers demanded the resignation of Brunswick District Attorney Jackie Johnson. The DA had recused herself from the case, shortly after the shooting, because one of the suspects had been an investigator in her office.

Protestors say her office failed to act quickly and issue an arrest for the two white suspects, Gregory McMichael and his son Travis McMichael. They weren't arrested until May 7 after video taken of the altercation went viral, sparking public outrage.

Now, reports confirm that one of the suspects actually helped release that video. According to NBC News, Gregory McMichael wanted the public "to know the truth" about the incident, and said he and his son were just conducting a citizen's arrest.

The father reportedly delivered the video to a local radio station, where it quickly became public about two weeks ago.

Both suspects face charges of aggravated assault and murder.  However, due to the coronavirus pandemic, the case has been stalled until at least mid-June when the court can call a grand jury.