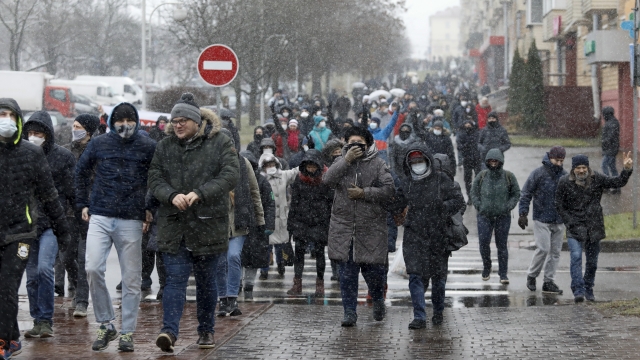 Hundreds were detained in weekend protests in Belarus as demonstrators continue to object to President Alexander Lukashenko's summer re-election — even as the embattled leader hints he *may step down.

On Sunday, chanting "go away rat," thousands of people marched in anti-government protests despite cold weather for what's been named the "Neighbors March."

According to a Belarusian human rights group, more than 300 people were arrested in the capital city of Minsk, as well as other cities.

Police deployed tear gas and stun grenades to break up crowds in Minsk. A human rights group says some demonstrators were chased by police and beaten.

Protesters say the country's August presidential election — which Lukashenko won by a landslide — was rigged. The Russia-backed Lukashenko continues to stand by the legitimacy of his re-election as the leader of the eastern European nation he has controlled for the last 26 years.

But there were signs that things might finally be changing. State media reported late last week that Lukashenko could step down as president after a new constitution is adopted.

How and if that plays out is being closely watched across Europe and beyond.