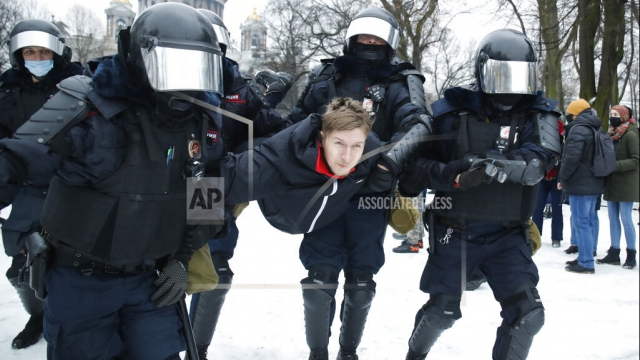 More than 850 people were arrested in protests over arrest of Putin political foe Alexei Navalny.

More than 1,600 people were arrested in several Russian cities Saturday after they protested the arrest of Alexei Navalny. About 5,000 protesters, including Navalny's wife, demonstrated in freezing temperatures in Moscow. Helmeted police officers beat some demonstrators with batons and dragged many to buses and trucks for arrest.

Navalny, who is considered President Putin's leading political adversary, was arrested in Moscow on January 17 upon his return to Russia from Germany, where he had spent months recovering after he being poisoned. He blames the Kremlin - and Putin.

Police say Navalny's time in Germany went against his terms in a suspended sentence in a criminal conviction in a case that Navalny says was illegitimate.

Navalny faces charges of fraud and money-laundering, which he says are politically motivated. The activist is known for his calling out alleged corruption in Putin's government.

Navalny is scheduled to appear in court in early February. He could face a 3 1/2 year prison sentence.