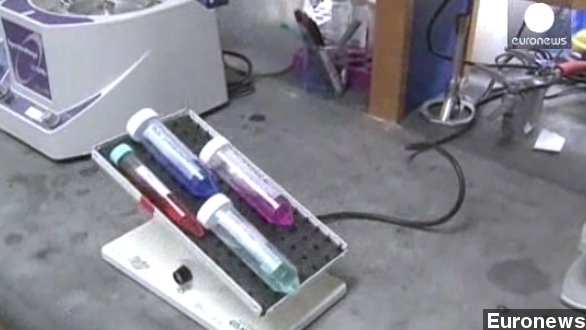 By Jasmine Bailey
September 7, 2014
A new study says the vaccine protected monkeys from the Ebola virus for 10 months. It became even more effective with a booster shot.
SHOW TRANSCRIPT

Dubbed the worst Ebola outbreak in history, more than 2,000 people in West Africa have died from the virus.

DOCTORS WITHOUT BORDERS INTERNATIONAL PRESIDENT JOANNE LIU VIA PBS: "Six months into the worst Ebola epidemic in history, the world is losing the battle to contain it."

But the fight against the deadly outbreak could be gaining a new weapon: a vaccine is being tested on humans for the first time.

The U.S. National Institutes of Health says animal trials using macaques showed the vaccine can make recipients much less vulnerable to the virus, though the effect began to wear off around the 10-month mark. (Video via BBC)

But the director of the U.S. National Institute of Allergy and Infectious Diseases told the BBC,"The good part of this vaccine is that at five weeks or earlier you get full protection. The sobering news is the durability isn't great, but if you give a boost, a second shot, you make it really durable."

The NIH along with the World Health Organization and several U.K. agencies all partnered with pharmaceutical company GlaxoSmithKline to create and test the vaccine.

But it will still be some time before it goes into widespread use. GSK says on its website: "Clinical development for a new vaccine is a long, complex process, often lasting ten or more years. It is difficult to accelerate this process because of the many important steps that a candidate vaccine must go through to ensure that it is safe and effective."

Health officials worldwide are trying to speed things up as best they can, because of just how severe the West African outbreak is.

Last month, the WHO approved the use of experimental drugs to help combat the disease. And last week it added a new experimental treatment to the list: using blood from Ebola survivors to help new victims. (Video via Euronews)

The NIH is also collaborating with at least two other companies that are working on their own vaccines, though none of the rest are up to the human stage of testing yet.