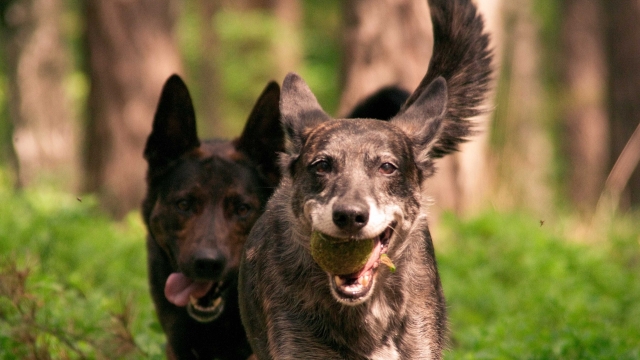 SMS
Humans May Have Tamed Wolves Twice Because Dogs Are Worth It
By Steven Sparkman
By Steven Sparkman
June 2, 2016
For years, scientists have debated whether dogs were domesticated in Europe or Asia. Turns out both camps might've been right.
SHOW TRANSCRIPT

It looks like domesticating dogs was such a good idea that humans may have done it twice — independently and half a world apart.

There's a long-running debate among scientists over when and where an ancient human first looked at an ancient wolf and thought, "Sure, I'll make that my best friend."

Modern dog DNA is so messy from interbreeding, it's been hard to tease out an answer.

Some studies point to Europe as the origin, others point to Asia, and some split the difference and say that dogs originated in Central Asia and spread to the east and west.

Now an international research team has compared DNA from ancient dog bones around the world, and the researchers say the results point to two domestications: one in Europe and a big one in East Asia that later moved west.

If that's true, it could help make sense of the confusing genetics. Take two different populations of dogs and breed them together, along with some more interbreeding with wolves along the way, and things are bound to get messy.

It's a pretty convoluted genetic history, but — the things people do for their dogs.

This video includes clips from Brook Peterson / CC BY ND 2.0, the U.S. Fish and Wildlife Service, Alina Odessitka / CC BY 3.0, Science, BBC and PBS and images from Camilla Faurholdt-Löfvall / CC BY SA 2.0 and the University of California, Los Angeles. Music provided courtesy of APM Music.