The Humanitarian Crisis In Afghanistan Is Getting Worse 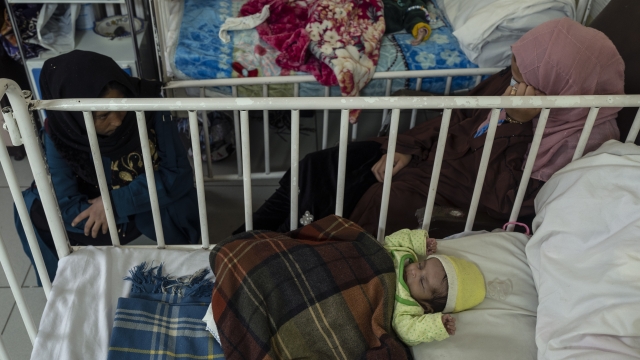 SMS
The Humanitarian Crisis In Afghanistan Is Getting Worse
By Meg Hilling
By Meg Hilling
December 17, 2021
Desperate families with malnourished children and COVID-19 cases are pouring into hospitals around the country but the hospitals are not equipped.

As winter rolls into Afghanistan, the country is suffering four months after U.S.-led forces pulled out and the capital city of Kabul fell.

Kristiana Marton with Save the Children in Kabul tells Newsy that desperate families with malnourished children and COVID-19 cases are pouring into hospitals around the country. Hospitals are not equipped to meet the dire needs of their patients.

"Nearly 24 million people are facing severe hunger levels right now, including approximately 13 million children," she said. "One of the issues with hospitals at the moment is the staff aren't being paid. They don't have the resources that they need."

It's a dark reality that health officials say is worsening by the day.

With the country's economy in shambles, its currency tumbling and billions in international assets still frozen as a result of the Taliban's takeover, Marton says families are having to make unimaginable decisions.

"I've also spoken to other families who have had to go to awful, awful — had to do awful things, like for example, give up their children because they haven't been able to afford to feed them," she said.

Infuriated by the state of the country, some women have taken to the streets to protest in recent weeks, chanting "food, work, freedom."

Since mid August, the Taliban has prevented many women from returning to work. Protesters say without work, they are unable to feed their families and that they refuse to live life under the Taliban as they had in the past.

"Most families are being forced to do things which no family should ever have to do," Marton said.

In Washington, a group of Democratic lawmakers are calling on the U.S. to help relief efforts. They've suggested there are ways to prevent a collapse of Afghanistan's economy without aiding the Taliban.

"If the international community came together right now, and we all stepped together and supported the people of Afghanistan, we would be able to make huge differences to stop this happening," Marton said.