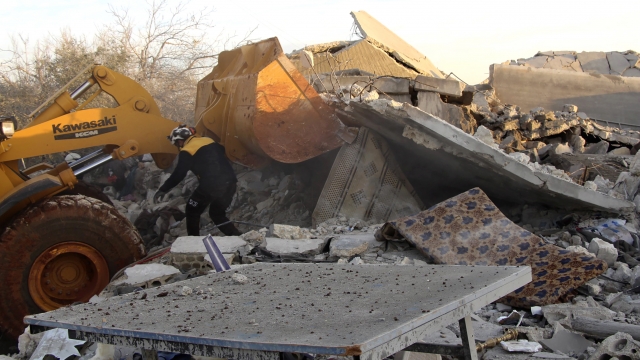 Fierce fighting was reported on the ground in Syria's Idlib province, despite a Russian and Turkish cease-fire that stopped aerial bombing.

A humanitarian crisis continues in war-torn northwestern Syria despite a cease-fire agreement struck Thursday between Russia and Turkey.

The two countries stopped bombing raids after the cease-fire took effect at midnight Friday. It was negotiated in a summit between Turkish President Recep Tayyip Erdoğan and Russian President Vladimir Putin. But journalists and humanitarian groups have reported that fighting on the ground continued.

Three million people were living in the Idlib province when fighting accelerated. More than 1 million have been displaced.

On Tuesday, Kevin Kennedy, the United Nations' top regional official for the Syrian crisis, said the conflict is producing"staggering" human suffering. Hundreds of thousands of people are fleeing towards the Turkish border, which is sealed off to war refugees.

"We are confronted with a very major humanitarian crisis, probably the biggest crisis we have in the world today. The numbers can be overwhelming, a bit staggering."

"If you fire heavy munitions into a built-up area, you will have civilian casualties. And this has been a constant feature of this war."

Hours before the cease-fire, human rights groups blamed a Russian airstrike for killing at least 15 people in a Syrian village populated by people displaced from other towns.

The Syrian Observatory for Human Rights reported another 15 deaths early Friday. Despite a halt in airstrikes, it said fierce clashes continued between Syrian government and rebel forces.