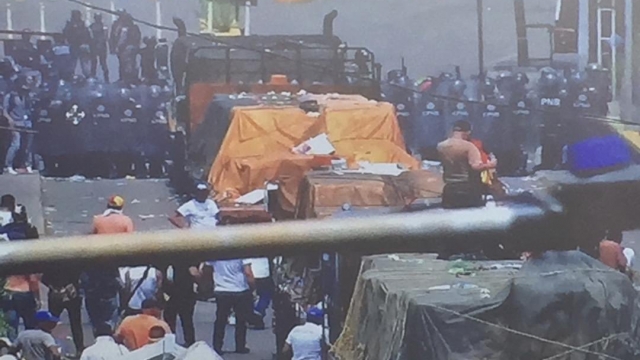 Guaidó called for the foreign aid last month. Venezuela is facing a huge economic and political crisis. Since 2014, around 2.5 million people have reportedly fled the country due to food shortages and massive inflation, among other problems.

On Saturday morning, exactly one month after Guaidó declared himself interim president, the opposition coordinated a mass effort to bring supplies into Venezuela. Citizens clashed with soldiers still loyal to President Nicolás Maduro throughout the day, leaving many civilians injured and at least one dead.

Guaidó said a supply truck entered Venezuela through the Brazil border, followed by trucks from Colombia that were blocked after crossing the border. The opposition leader said Maduro loyalists set one truck on fire, but opposition volunteers worked to save the food and medicine.

By and large, the military has remained loyal to Maduro, and that's been a huge asset to him. But earlier this year, the Guaidó-led National Assembly passed a new amnesty law for civilians and military who defect and join the opposition.

Several members of the National Guard defected on Saturday, which is a major win for the opposition. The armed forces are widely seen as a key player in the outcome of this uprising, and the opposition is encouraging them to switch allegiances.

U.S. Vice President Mike Pence is scheduled to give a speech in Colombia in the coming week regarding Venezuela's humanitarian crisis.