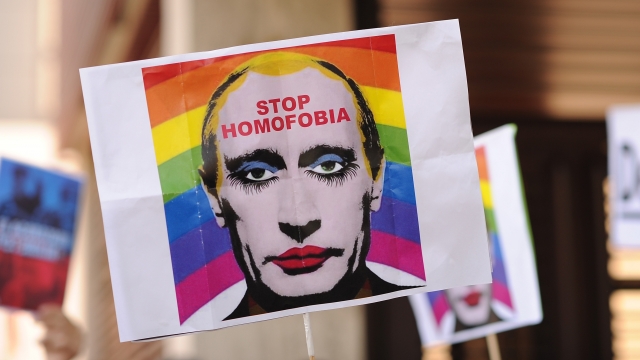 Russia's anti-LGBTQ policies are under fire again, this time by the European Court of Human Rights.

The policy in question, which bans LGBTQ "propaganda," is designed to penalize LGBTQ expression in an open setting. It was passed in 2013 despite protest from gay rights groups.

Since its passing, fines for "gay propaganda" have reached up to 50,000 rubles — a little over $800. Actions deemed illegal include picketing, protesting and posting online in support of gay rights.

In Muslim-majority Chechnya, authorities have arrested men "in connection with their nontraditional sexual orientation, or suspicion of such."

On Tuesday, the European Court of Human Rights ruled unanimously in favor of three gay rights activists, and six out of seven judges held that the Russian law was both discriminatory and in violation of freedom of expression.

Russian officials said they would appeal the decision. They argued that the law protected the morality of children.

During the hearing, the Russian government argued that language supporting homosexuality "placed psychological pressure on children, influenced their self-identification and intruded into their private lives."

Despite an overwhelming amount of condemnation against Russia's anti-LGBTQ policies, the case is the first major ruling against the country's "gay propaganda" law.