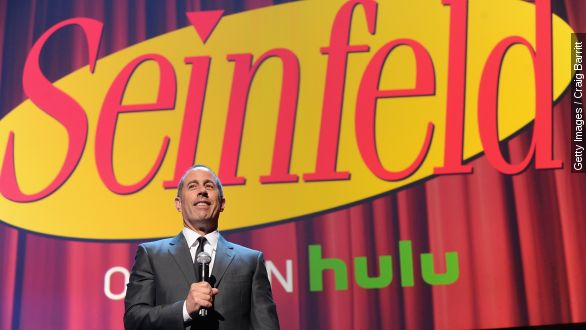 It only seems right that just a few months after "Friends" heads to Netflix, "Seinfeld" makes its way to Netflix's competitor Hulu.

Hulu is paying $180 million for all nine seasons of the classic NBC comedy. Seinfeld will still be shown in abundance on television thanks to its deal with TBS, but if you want to binge-watch Jerry and the gang, you'll have to subscribe to Hulu. (Video via Crackle / "Comedians In Cars Getting Coffee")

"See, no one told you life was gonna be this way." (Video via Netflix)

Hulu valued "The Show About Nothing" around $1 million per episode. According to The Wall Street Journal, "Friends" received a smaller per-episode payday from Netflix of $500,000, though Netflix never officially released the numbers behind the deal.

Along with the Seinfeld news, Hulu also announced a deal with AMC Wednesday morning which includes the exclusive rights to "The Walking Dead" spinoff "Fear the Walking Dead."

Hulu has had a solid year of growth, ballooning to around 9 million paid subscribers — up 50 percent from last year. But it still trails Netflix — the king of streaming video on-demand — by more than 50 million people.