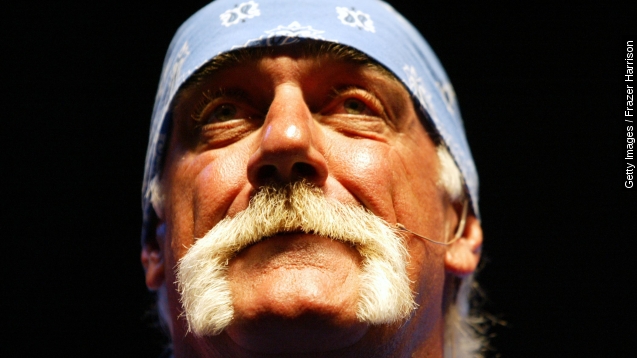 SMS
Hulk Hogan Defended By Friends, Family After Racist Remarks
By Christian Bryant
By Christian Bryant
July 25, 2015
Friends and family of Hulk Hogan, whose real name is Terry Bollea, defended the legendary wrestler after some of his racist remarks came to light.
SHOW TRANSCRIPT

Despite professional wrestling legend Hulk Hogan being dropped by the WWE and scrubbed from their website for racist remarks made nearly a decade ago, he's still got folks in his corner.

Many from inside and outside the wrestling community have come to the 61-year-old Hogan's defense after it was discovered he casually dropped the n-word several times in a recording from 2006. (Video via CNN)

Wrestling stars like Mick Foley, who wrestled under a number of personas, and Glenn Gilbertti, who wrestled as "Disco Fever," both tweeted support for Hogan.

Hogan's daughter, Brooke, posted a lengthy poem and photo collage of her and her father on Facebook. She wrote, in part, "Just like you and I, things we don't mean can sometimes slip."

Those words that slipped were uncovered as a part of Hogan's $100 million personal injury lawsuit against Gawker media for publishing footage from an alleged sex tape featuring Hogan online. That lawsuit is still ongoing.

Hogan has since apologized for his remarks telling People magazine, "This is not who I am. I believe very strongly that every person in the world is important and should not be treated differently based on race, gender, orientation, religious beliefs or otherwise."