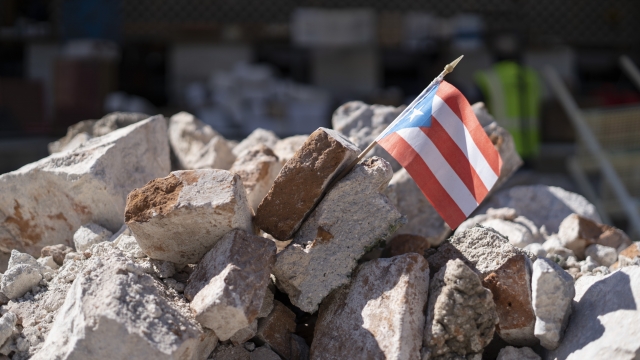 The Department of Housing and Urban Development will release more than $8 billion in disaster relief aid to Puerto Rico. The U.S. territory will now be able to access the funds after a monthslong hold.

The announcement early Wednesday came at a critical time for the island: Puerto Rico has been rocked by earthquakes in recent days, and it's still recovering from the devastation caused by Hurricanes Irma and Maria in 2017.

On Wednesday afternoon, demonstrators gathered outside HUD's office in Washington, D.C., to demand the agency release the full amount of relief funds.

Congress had authorized HUD to administer nearly $20 billion to Puerto Rico in the aftermath of those storms. But Politico reports that before Wednesday, the territory had only received $1.5 billion of that amount.

In September, HUD missed a legal deadline to issue an official notice on the availability of the funds. The delay riled Democratic lawmakers, but the agency said it had to ensure financial safeguards were in place following political unrest on the island.

Last week, House Speaker Nancy Pelosi rebuked the Trump administration over the stalled funding. She called on officials to "cease and desist that illegal activity."

Following the decision, a senior HUD official told Newsy: "Now that a full financial monitoring team is assembled and active, we can move forward with confidence that these disaster recovery funds will reach those who need them the most."

The news was welcomed by Puerto Rico's resident commissioner and Democratic lawmakers. In a statement, Reps. Nita Lowey and David Price said there were still unanswered questions about the delay, but that "all major hurdles" seemed to be cleared.

They said: "We expect that HUD will work collaboratively with Puerto Rico as they continue their recovery, and we will continue to provide robust oversight to ensure it does."