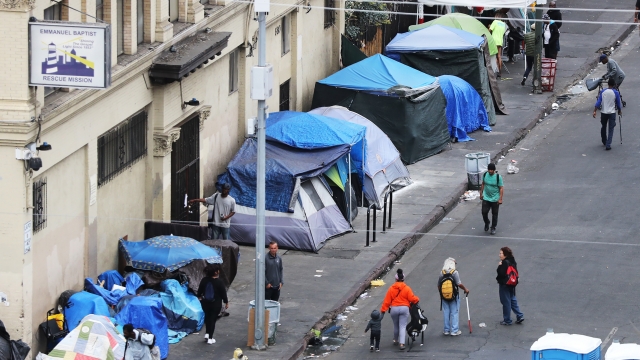 SMS
HUD: Homelessness In U.S. Increased 2.7 Percent In 2019
By Ahmed Jawadi
By Ahmed Jawadi
December 23, 2019
The agency said nearly 568,000 people "experienced homelessness on a single night in 2019." That's a 2.7 percent increase from the year prior.
SHOW TRANSCRIPT

Homelessness in the U.S. rose for a third straight year in 2019, according to a new government study.

The Department of Housing and Urban Development said in a press release Friday nearly 568,000 people "experienced homelessness on a single night in 2019." That's an increase of 14,885 people – or 2.7% – from the year prior. According to HUD, while 29 states and the District of Columbia reported declines in homelessness in 2019, those were offset by increases from the other 21 states, "particularly California and Oregon."

The agency says homelessness in California increased by more than 21,000 people in 2019, "which is more than the total national increase of every other state combined." HUD Secretary Ben Carson called on local and state leaders in California to address the homelessness issue "with crisis-like urgency," saying it will take "a broader, community-wide response that engages every level of government to compassionately house our fellow citizens who call the streets their home."

During an interview with "Fox & Friends" on Friday, Carson also criticized policies that allow for people to sleep in public areas, saying, "When you allow them to just sleep there and create a health hazard, they're much less likely to go to the places that are actually designed to help them get out of that situation."