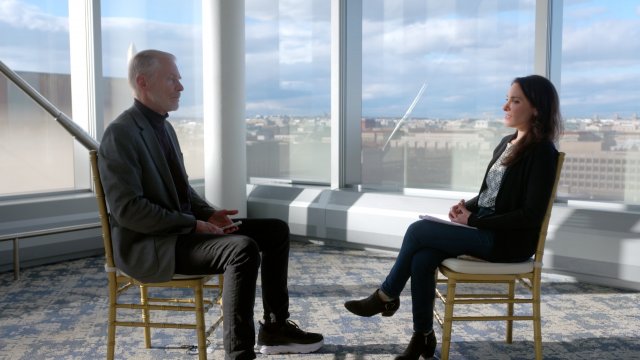 Andy Purdy, who joined Huawei as Chief Security Officer for the U.S. after working in the White House and the Department of Homeland Security, minimized those threats. He told Newsy that the U.S. is harming Americans more than Huawei.

As an American, do you think these are legitimate concerns -- surveillance, economic espionage?

Are you saying this as a Huawei representative or as an American?

"I'm saying this as an American because fundamentally I was hired to do what I've been able to do, which is to promote a safer cyberspace," Purdy said.

Huawei has insisted it isn’t connected to or influenced by the Chinese government, even after a 2017 intelligence law gave authorities in China the power to access information from institutions under the guise of national security.

How can you guarantee that the Chinese state won't put pressure on Huawei?

"We can put in place measures that demonstrate that we have not accessed any data that we're not authorized to access or that we've sent it to anybody."

Purdy went on to say, "You can have systems where you use specially configured laptops, which we do, so that every keystroke is logged and recorded. So you can fully reconstruct those sessions and you have great visibility in the telecom operators so you can prove that you haven't accessed data you're not supposed to access."

Purdy says that there are other measures that protect customers from unauthorized equipment updates, and ways to check for security vulnerabilities. But a tech expert recently found a backdoor -- a remote debugging and management tool -- in Huawei video recorders and security cameras.

It comes after the UK made a deal with Huawei to build limited parts of its 5G network -- a decision that the Trump administration rebuked.

"We just don’t believe that utilizing the assets, the technology of Huawei, is consistent with the security or privacy interests of the UK, of the United States," Vice President Mike Pence told CNBC.

"What I'm tired of is people that are unwilling to listen to what I say, and I'm tired of the fact that the U.S. is focusing on hurting Huawei," Purdy said.

But back in 2012, Congress issued a report. It said that there was suspicion that Huawei was tied to the Chinese state. So it's not that this is necessarily only to do with the Trump administration.

"Well, there's no question that the concerns of the United States government leadership, both parties, have very great concerns about U.S.-China relations, of the actions and conduct of China," Purdy said.