#HowOldRobot Collects How Much Data? 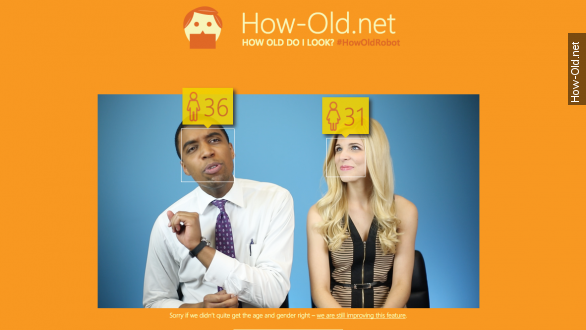 SMS
#HowOldRobot Collects How Much Data?
By Cliff Judy
By Cliff Judy
May 1, 2015
Microsoft's How-Old.net age guessing website went viral in a flash, but it's important to note how much metadata the developers can collect.
SHOW TRANSCRIPT

Well, they finally did it. Microsoft combined the age-old obsession of other people guessing your age with our much newer obsession with selfies.

"Like my face looks a little wide, so I'll crop half of it," Kim Kardashian said on "Jimmy Kimmel Live."

"Let me do it in my profile," Kimmel said.

Microsoft's new website How-Old.net lets anyone upload a picture and then guesses your age based on face detection software.

In many cases, the How Old Robot has been comically bad at overestimating one's age — probably adding to the frenzy of people wanting to test it. Ellen DeGeneres, though, declared the robot a genius for putting her at 27.

But remember, there's a reason Microsoft would publish a free service like this. Your data.

In a blog post Wednesday, two Microsoft developers talked about designing the website using the company's Azure software to develop and distribute apps. They also profiled how they could see metadata from any picture uploaded. In their example, they showed a woman estimated at 23 years old uploaded the picture from an iPhone on Monday. And the latitude and longitude of where the picture was taken? Not surprisingly, Seattle — just a few miles from Microsoft headquarters.

The bloggers explained it took developers "just a day" to put How-Old.net together and added, "This turned out to be a great example of the power of Azure services." (Video via Microsoft)

That certainly makes it seem like How-Old.net is less about entertaining people and more about collecting your data and encouraging app developers to use Azure.

Some have also pointed out you're presumably submitting your photo under Microsoft Azure's terms of service, which grants the company a lot of leverage in using the photos — however unlikely that may be.

But if you're okay with that, you're certainly free to test the robot out for yourself.