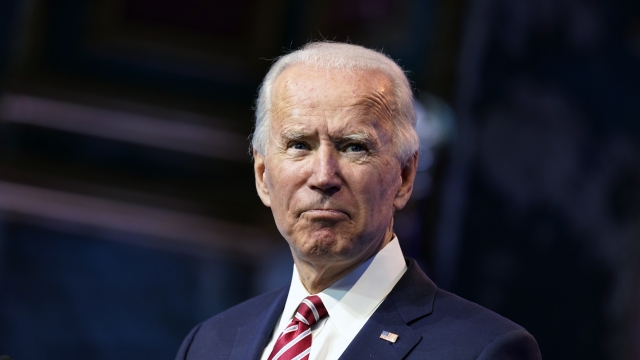 SMS
How Will Joe Biden Change Foreign Policy?
By Ben Schamisso
By Ben Schamisso
November 18, 2020
The president-elect wants to restore America's world leadership. But diplomacy aside, experts say he doesn't have a mandate for dramatic changes.
SHOW TRANSCRIPT

On day one, he says he will rejoin the Paris climate accord and the WHO. He's also open to the idea of reentering the Iran nuclear deal under certain conditions.

"The Biden administration will have a clear sense of what it hopes to accomplish. That's the sort of thing that I think the allies appreciate because it makes things kind of predictable and understandable," said Ian Hurd, a  professor of political science at Northwestern University.

But diplomacy and rhetoric aside, experts say don't expect the world to change too much under a Biden administration.

"There's not much of a mandate for any dramatic changes outside of restoring what was the case in the Obama administration," said Thomas Schwartz, a professor of history and political science at Vanderbilt University.

With the pandemic and the economy to tackle at home first, Biden's international agenda may be minimal at first. Even after the pandemic, he will likely avoid major world entanglements.

"Biden was part of an administration that got the United States into Libya and now looks at that as a big mistake," said Schwartz.

Under a Biden presidency, America's rivals will face a more unified West — ready to impose sanctions or revive diplomacy in unison.

"The United States will be working with its allies, for example, to hammer out new trading rules with China or sanctions toward Russia," said Schwartz.

Some analysts hope Biden's diplomatic approach will lead to arms control deals or other conciliations with countries like Iran and Russia.

"It will be refreshing if the Biden government doesn't come in, assuming that it has implacable enemies in the world that it needs to degrade," said Hurd.

However, rising tensions with China are not going away. And Biden's plan to contain China's growing world influence is in line with current policy.

"This summer you had Secretary of State Pompeo talk about the desire to create an alliance of democracies to balance against China both in the economic and military sphere. But that echoes a phrase that's been used by members of Biden's campaign," said Paul Poast a professor of political science at the University of Chicago.

Biden may also seek to build on President Trump's legacy on North Korea.

"I don't think the Biden administration is going to go back to a policy of 'we can't talk with Kim Jong Il, we can't meet with him. No, we can do those things, but we just need to be better at following up on the details and actually trying to get concrete steps taken by North Korea," said Poast.

Analysts also expect Biden to carefully build on the momentum of the Arab-Israeli rapprochement in the Middle East, fostered by the president's son-in-law, Jared Kushner.