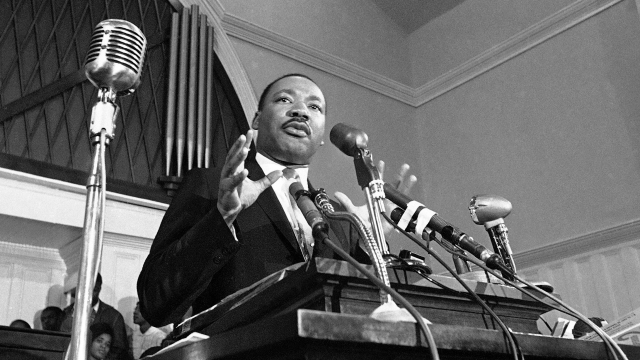 SMS
How Voting Rights Have Changed Since Martin Luther King's Push
By Newsy Staff
By Newsy Staff
January 17, 2022
Voting options are narrowing, and the voting process is getting tougher as many states put tighter restrictions in place.
SHOW TRANSCRIPT

Part of Dr. Martin Luther King Jr.'s dream for America is more relevant than ever now: the right to vote.

Much of Dr. King's advocacy for civil rights tied back to voting rights, like his 1957 "Give us the ballot" speech, his work in organizing the 1965 Selma to Montgomery march and his role in pushing for the 1965 Voting Rights Act.

But now in 2022, voting options are narrowing, and the voting process is getting tougher as many states put tighter restrictions in place. The burden for many of those changes is landing on voters of color.

Right now 35 states have some form of voter ID laws on the books. Those laws usually don’t explicitly discriminate against voters of color, but they do place a burden on lower-income or more rural voters to take the time to get and/or pay for an ID. Even if an ID is free, those people often lose out on hours or a day of work to get one.

Given that the evidence shows Americans of color tend to make less than White Americans and are less likely to already have the needed IDs, it adds another burden for voters of color.

There used to be another layer of protection over some jurisdictions that prevented hurdles to voting, but the Supreme Court's 2013 ruling in Shelby County v. Holder eliminated that by gutting a key section of the Voting Rights Act — a law that Dr. King was instrumental in advocating for.

And the removal of that protection led to the laws becoming more restrictive. That’s according to USC Law Vice Dean Franita Tolson, who has testified before Congress about voting rights issues and is an author of two upcoming books about voting and election law.

"So a lot of states have voter ID laws, but it's important to distinguish between types of voter ID laws to the extent that a state has a restrictive one," said Franita Tolson, vice dean for faculty and academic affairs at USC Gould School of Law. "But what we saw in the wake of the Shelby County decision was states enacted more restrictive voter IDs, voter ID laws because they don't have to preclear with the federal government."

Some of the provisions of that law help protect voters of color.

Section 5 of the Voting Rights Act required certain cities, counties or states with a history of discrimination to obtain what’s called preclearance — that is, those places would need federal approval before changing voting or election laws. That’s the part the Supreme Court gutted.

But recent challenges often center around Section 2 of the law. That bans any voting practice or procedure that discriminates based on race, color or language. A later amendment made it so it could be enforced regardless of whether the laws were intended to discriminate.

But a Supreme Court case last year on Arizona’s voting laws raised the threshold that a new law would have to meet to be considered a violation of Section 2.

"The Supreme Court was looking at changes to Arizona's election law, and they were specifically looking at changes that seemed to negatively impact Black voters, Hispanic voters and Native American voters," said Ciara Torres-Spelliscy, a fellow at Brennan Center for Justice. "The Supreme Court said, no, there's actually no problem here, and the state can justify the changes that they made, which are more restrictive on voting rights if the state says that they are worried about voter fraud."

Torres-Spelliscy is a visiting professor at American University and an expert in election and voting law. She says this decision can make it easier for states to justify voting law changes without even showing evidence of fraud.

"It is a enormous boon to state lawmakers that the Supreme Court is now being so permissive and is giving such deference to the states when they enact new laws, especially when they enact restrictive voting laws," Torres-Spelliscy said.

Even with these federal laws, a central issue is that elections are administered entirely by state and local officials, and aside from core laws like the Voting Rights Act, most other questions around elections – like voter ID, early voting times, absentee ballot policies – all are decided on a state-by-state basis.

Now, there are policy solutions pending in Congress that could address some of the problems cropping up in the current setup.

Democrats have centered their push around two bills.

The John Lewis Voting Rights Advancement Act is a bill that’s been bubbling among Democrats since 2019. It would restore a pre-clearance requirement for voting law changes similar to the old Section 5 of the Voting Rights Act and give the law more avenues to survive lawsuits, and make it easier to challenge voting or election laws for discrimination.

That bill failed when it was brought up for a vote in November. Democrats voted for it, along with one Republican, but it didn’t overcome a filibuster that required 60 votes for the law to pass.

The second bill – the Freedom to Vote Act – was introduced this fall as a compromise after some wariness about the initial bill from moderate Democratic Senator Joe Manchin of West Virginia.

It would require expanded early and absentee voting, make Election Day a federal holiday, enable automatic registration for voters, and also deal with other election issues – including a ban on partisan gerrymandering and new protections against partisan interference in the work election officials do.

Last week, in early January, the House passed a consolidated piece of legislation that combines these two bills.

"The provisions of the Freedom to Vote Act that are that are now a part of this mega bill are also important for everyday voters," Tolson said. "If it passes, it's a completely new day for American democracy. That bill would be the most important voting bill since the Voting Rights Act of 1965."

Democrats by and large support these laws, but Republicans are nearly unanimous in opposing them. Because the filibuster makes it so easy for any senator to force a 60-vote threshold to pass a bill, and because some Democrats oppose getting rid of the filibuster, these bills are heading nowhere fast.

It’s led to a lot of pushback from voting rights advocates, who want to see Democrats eliminate the filibuster, if not for all bills, then at least for these federal voting laws.

Speaking in Georgia in early January, President Biden endorsed working around the filibuster to pass these bills. But at least one Democrat, Senator Kyrsten Sinema of Arizona, objected to the approach.

A coalition of voting rights groups in Georgia told President Biden to scrap the trip he took to the state last week unless he revealed a more concrete plan to immediately pass stronger federal voting laws.

But some groups still didn’t think President Biden went far enough, and now members of Dr. King’s family have spoken out. Martin Luther King III and other members of the King family are spending the long weekend marching in both Arizona and Washington D.C. with a coalition of groups to pressure Congress to act on voting rights.

But even as the fight about federal voting rights continues in Washington and states pass tougher voting laws, many communities of color and voter advocates are using the Voting Rights Act to fight back. It’s worth noting that the effects of Dr. King’s advocacy don’t just apply to Black voters. Other communities have used provisions of the Voting Rights Act to protect their rights too.