How Violet T. Lewis Started A College With Just A $50 Loan 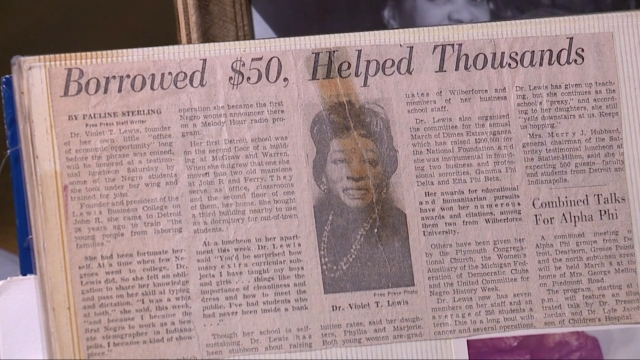 "Her vision was a reality," Violet said. "The first Blacks you find in most of the major corporations in this area came from Lewis College of Business, or Lewis Business College at that point."

To Violet and Stefeyne, Violet Temple Harrison Lewis wore many hats — not just those of educator and businesswoman.

With a $50 loan, a determined young Lewis bought several used typewriters, and started the Lewis Business College in Indiana.

Then, just before 1940, she opened a Detroit branch.

The Motor City is where the Lewis College of Business would really take off, seeing thousands of graduates over the years, both men and women.

Faculty and alumni became like family, says the younger Violet — named for her grandmother. Both she and Stefeyne followed in her footsteps, becoming educators themselves.

Keeping Violet's vision in focus is important to the school's new president, Dr. D'wayne Edwards, who last fall — with the help of the Gilbert Family Foundation — announced he'd be re-opening the school, which closed in 2013.

As a successful shoe designer, he founded Pensole Footwear Design Academy in Portland. Now, he hopes to fill what he sees as a gap in Detroit's creative industry — Black talent.

"Marring her history with our small brief history, and then solving a massive need for corporations as it pertains to product design," Edwards said.

"His vision is very similar to our grandmother's. And that's what sold Violet, myself, and Shirley — my sister," Stefeyne said. "He believes in excellence."

Product and industrial design will be the focus of the new Pensole Lewis College of Business and Design.

Come may, the school will share space with the college of creative studies in Newcenter, before its own facility is finished.

"I have several students of mine that have left Michigan and moved to Oregon because that's where they were able to have opportunity," Edwards said.

He hopes this re-opening will keep talent in the city.

It's first students will get a free, 5-week master class with a local company — Carhartt, who's designers helped create the curriculum.

They've lined up partnerships with eight other companies, including Proctor and Gamble, Wolverine and Nike.

"It's like you have a real job for five weeks, but you're being taught the way you would actually work at the corporations we're partnering with," Edwards said. "It's going to give them another talent pool to pull from that's home grown."

To make sure Lewis' legacy is never far from thought, Edwards say she'll even be reflected in the schools new colors with shades of violet.

"She had this gift of making people think they could do the impossible, which for her was not impossible. It was possible," Violet said.