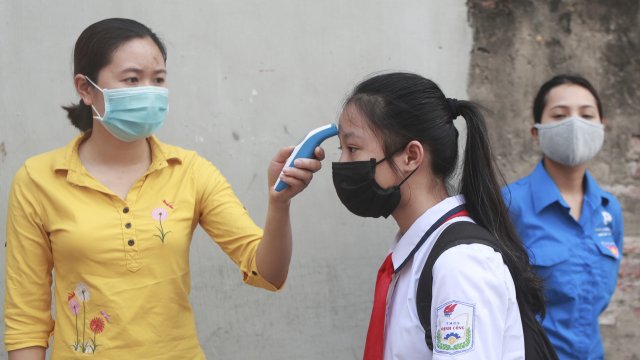 Despite sharing a border with China, Vietnam hasn't recorded a single COVID-19 death. How did it achieve such a feat?

It's business as usual in Vietnam. The southeast country of nearly 100 million lifted its successful lockdown a month ago.

Despite bordering China, it only recorded about 300 cases and no fatalities at all. How did it achieve such a feat?

"They didn't wait for people to get sick to isolate them. So there was a very intensive system of catching people, so to say, who had been exposed," said Rogier van Doorn, director of the Oxford University Clinical Research Unit in Hanoi, Vietnam.

As soon as China announced its first COVID-19 death in early January, Vietnam started health checks at border crossings and airports — even though the virus hadn't hit home yet.

When virus cases first emerged during the annual Lunar Year school break, Vietnam decided to keep all schools closed indefinitely. In February, authorities sealed off two communes that saw a few infections. They also closed a complex of hospitals for three weeks after the virus infected some staff members.

"There were more than 1,000 patients. And the whole premises, eight hospital staff, patients, it was all shut down. Fifteen thousand people were tested," van Doorn said.

By early March, Vietnam was sending most people entering the country to government facilities for 14 days. Those inside the country who had been in contact with a confirmed case were either sent to those facilities or forced to quarantine at home. Everyone in quarantine received free testing.

"The initial feeling is, 'Oh, really, I have to stay home and I literally cannot even leave my front door?'" said James Talbot, a tourist worker in Ho Chi Minh City, Vietnam.

Talbot reached out to authorities after learning he had been at the same bar in Vietnam as someone who later tested positive.

"I came home from work to find they'd placed one of the building security guards outside of our apartment door, and he would remain 24/7 for the next two weeks just to ensure that we didn't leave at all," Talbot explained.

He says he understands why he was forced to stay at home.

"We are happy that those measures were put in place, actually, because now we are completely free of the virus," Talbot said.

Because Vietnam's government is authoritarian, it can control people more firmly than freer, open societies. Also, its data has been questioned. But health experts told Newsy they believe the low virus numbers and hope Western countries can look at Vietnam with humility.

"Maybe a lot of high-income countries didn't get it right this time. And how can they get it better next time? Because this is not the last time this will happen to us," said van Doorn.