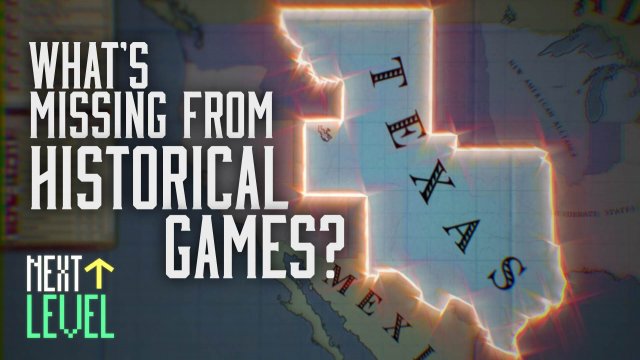 SMS
Video Games Are Teaching Players Real (And Alternate) History
By Matt Picht
By Matt Picht
October 4, 2021
History-based video games allow their players to engage with the past in completely new ways. But like every medium, the genre still has limits.
SHOW TRANSCRIPT

The American Civil War was a time of great strife for our country — but a great opportunity for the independent state of Texas. Having already claimed New Mexico from the Mexican government, the state of Texas began a campaign of northern expansion that would see it claim Colorado and Utah for its own. With the further fragmentation of the Union, Texas was able to ally with the Great Lakes' new power, the New American Alliance. By the start of the Great War in 1915, Texas was recognized as a world power in the form we now know as: Large Texas.

Now, this is, of course, all nonsense — but it's nonsense with a purpose. Large Texas is the culmination of hours of gameplay: forming alliances, cultivating resources, and fighting military battles to form it.  There's a whole genre of similar video games that play around with the "what ifs" of the past — and in doing so, these games have started to teach us about history in new ways.

But turning history into a game presents some unique challenges for game developers — and raises questions about how those histories are portrayed.

Historical fiction is a well-established genre in video games. Major franchises like "Assassin's Creed," "Civilization" and "Red Dead Redemption" all ground their stories in real-world history that you, the player, can reshape — and they've become wildly popular in doing so.

Games like these are entertainment, first and foremost — but they're also embracing their learning potential, with non-competitive educational modes and in-game reference links. As popular media goes, video games have an outsized power to shape how we look at history.

Soren Johnson, a game designer who led the development of acclaimed strategy game "Civilization IV," told Newsy: "I love history. And the fact that like, I'm just horrible at fiction means that it's the easiest thing to work from, because you get just all these raw materials there to work with."

Johnson said: "You're kind of like this one city, and you've got this world with, you know, the Greeks and Egyptians and the Persians, and you're kind of finding your place in it."

Both "Old World" and "Civilization" are what are known as 4X games: They force players to explore their environment, expand their civilization, exploit their resources, and exterminate rival civilizations. "Old World" focuses mostly on dynastic squabbles between ancient kingdoms, while conflict in "Civilization" can get a bit more … advanced.

Progression in these games looks like actual history: Players will uncover actual landmarks, implement authentic technologies, and face similar challenges as the societies their game is based on. "Old World" in particular models many of its events off of specific moments in history.

Johnson told Newsy: "People do buy the game because they want to feel like they're touching history, right? What I would call it, like a historical "Fantasia," you know, it's kind of like, this fever dream of history.”

So, chances are, the types of history you'll create in these games won't bear much resemblance to the real thing. But that's kind of the point — these games present a version of history that's malleable. By exploring the variables that determine the historical truths of these games, players can have a better understanding of why real-world events unfolded the way they did.

This ability — to play around with historical realities — has sparked a lot of interest in using popular games in the classroom. One teacher at the forefront of these practices is high school history teacher Jeremiah McCall.

McCall told Newsy: "Thinking about history as something that's not predetermined, but is something that sort of is the result of choices made over time — I think that's something a game can do better than any other medium."

McCall is the author of "Gaming the Past," a book about teaching history through video games. His website of the same name focuses on analyzing new historical games.

One aspect McCall finds useful for education is how a game's mechanics — the tools and challenges they present the player with — can mirror actual history. Grand strategy games like "Crusader Kings" or "Europa Universalis" do a thorough job of mimicking the distant past, modeling such esoteric traits as succession laws and administrative efficiency.

The devotion to getting the historical details right could, in theory, allow players to relive the history of their chosen state. But it also allows players to go wildly off-book — see, for example, Large Texas. And McCall argues that style of play is also very educational.

McCall said, "Counterfactuals can really provoke some thought about why the historical outcomes of something happened, what might have changed to allow it to come out differently. Because it allows you to think about, OK, what were the factors? What were the systems? And how do individuals sort of fit into this?"

Several studies have found video games can supplement a more traditional history class by spurring students to get invested in the material they're learning about.

But as with every other medium, games are constrained by their format — there inevitably comes a point where the game starts to get in the way of the history it's retelling.

One common critique of historical games is that they're designed to be won. Things like victory conditions and objectives tell players both that history is a race to the finish line — and often that the way to win that race is by following a distinctly Western model of progress.

McCall told Newsy: "If you historically can make your civilization act kind of like how the United States has acted historically, and follow the technological paths and things that as follows, then you will be victorious. And there is something about that, that we should be really careful about — this idea of competition and victory being a possible outcome between cultures."

Mechanics that encourage claiming territory and conquering rivals make for a fun video game — but a lot of cultural complexities can get lost in the singular drive to "win" a game.  For example, it's perfectly possible to play around with the history of some Native American tribes in "Europa Universalis 4": The game rewards players with a "No Trail of Tears" achievement for overtaking the American colonies as a Cherokee nation.

But success in that game still relies on forming a cohesive empire and conquering as much territory as you can — which just isn't how those cultures actually existed. The game's logic is predicated around Western-style nation-states — anything divergent from that either gets pushed into the mold or erased as powerless "uncolonized territory."

These factors have more persuasive weight precisely because the game is a system; the "right" way to rule a civilization is baked into the game's logic, an intrinsic rule of the virtual world. That means developers have to be deliberate about what values they import into their game.

Johnson told Newsy: "If you're doing a game that deals with the modern era, you know, or even early, just the whole colonialization era. Yeah, I think I probably would have some thoughts about that. If I was doing that, again, that maybe I didn't have during Civ 3, and Civ 4."

So far, the 4X genre has proven a poor fit for portraying indigenous cultures — but other games have had more success. Smaller, Native-led projects are using games to retell specific stories that often don't make it into the larger historical native.

David Lewis is an assistant professor at Oregon State University and a member of the Confederated Tribes of Grand Ronde. He also contributed to the indie game "When Rivers Were Trails," an adventure game about the seizure and division of tribal territory caused by the U.S. allotment acts of the late 1800s.

Lewis told Newsy: "The way the history has been told, and been passed on to generations of people, is not a complete history. We're only getting a very small portion of that overall perspective of history. And I think that if people knew, and understood that better, they'd be more critical about what they're looking at, there’d be more calls for a more comprehensive history."

"When Rivers Were Trails" focuses on crafting a specific experience rather than laying out the historical sandboxes found in 4X games. But even without the empowerment that defines the genre, this game still immerses its players in the history it's retelling. It allows players to make decisions and face consequences from a perspective that often goes overlooked in history classes.

Lewis told Newsy: "A lot of what we're doing here in Oregon, a lot of Oregon natives that are working in education are interested in new kinds of products like this game that could actually teach in another way, teach closer to what a native narrative would be, or oral history would be. Which has been noted by some scholars, it's a better way to teach. People really learn a lot from gameplay."

Ultimately, video games are still a powerful tool for bringing history to life, offering players new angles from which to view old events. But games are designed to be fun, first and foremost — it takes real, critical work to ensure the lessons you're taking from a historical game end up being the right ones.