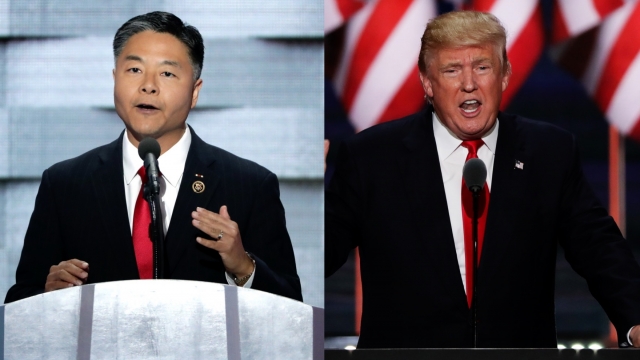 "I cannot normalize Donald Trump. He, I believe, is a danger to the Republic," Congressman Ted Lieu told Newsy in a recent sit-down.

Lieu is a U.S. Air Force vet, Californian and currently a serious critic of President Trump.

Lieu has been an outspoken critic of Trump since before the election. And since then, Lieu's ramped it up, even creating a presidential "illegitimacy clock" on his website.

For almost every Trump controversy, Lieu's office releases a statement rebuking the president. He says it's his duty to speak out. And recent protests seem to have emboldened him.

"What you are seeing is a real populist movement of people all across America who are opposing these actions by the Trump administration," Lieu said.

But then there's the question of making sure opposition doesn't just turn into complete obstruction — leaving us with a government that doesn't get anything done. Remember moments like this?

"Our top political priority over the next two years should be to deny President Obama a second term," Sen. Mitch McConnell said.

Lieu doesn't seem entirely opposed to taking a note out of the GOP's Obama-years playbook. But he hasn't thrown working with the president out the window just yet.

And Lieu is in it for the long haul until the Trump presidency is over — whenever that is.