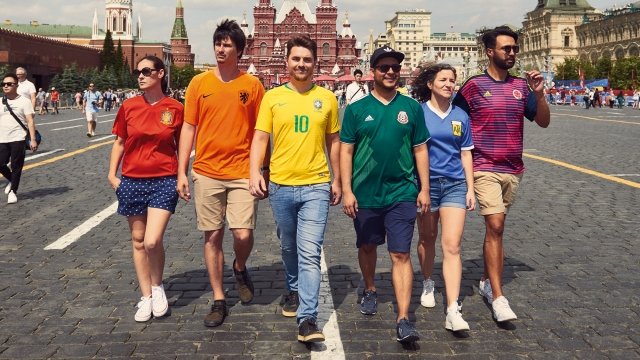 SMS
How To Smuggle A Pride Flag Into Russia During The World Cup
By Cat Sandoval
By Cat Sandoval
July 11, 2018
Flying a rainbow flag in Russia is illegal, even dangerous. But 6 protesters from 6 different countries found a way to show LGBT love in Russia.
SHOW TRANSCRIPT

Flying the LGBTQ Pride flag in Russia is dangerous, but a group of activists smuggled the symbolic rainbow into the world's biggest stage — the World Cup. 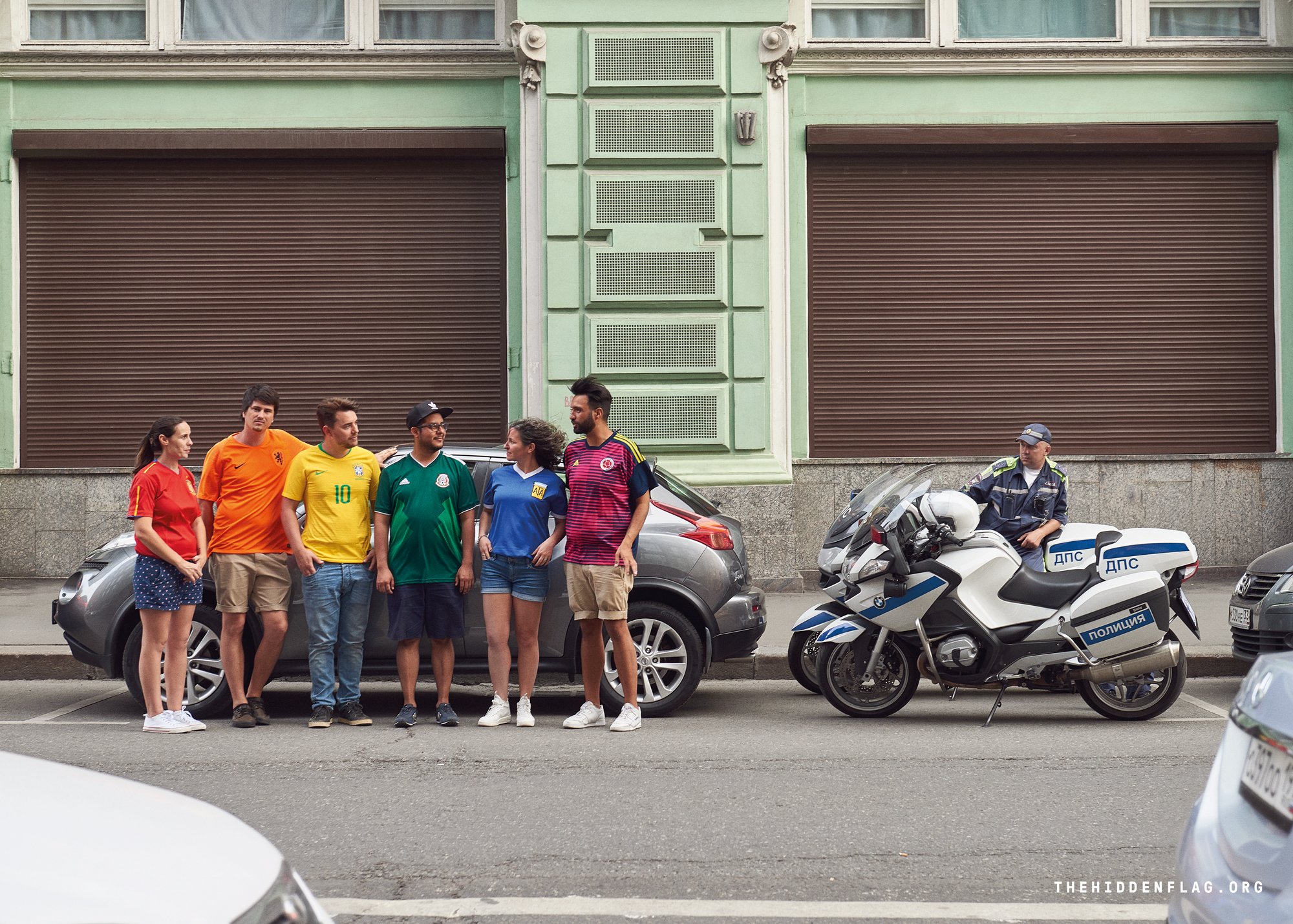 Eloi Pierozan Junior is the man wearing yellow. Since he's Brazilian, he's wearing the country's football jersey. There are five other activists from five other countries: red for Spain, orange for the Netherlands, green for Mexico, blue for Argentina and purple for Colombia.

"We tried to make it as organic as possible, like not to walk around like in position of the rainbow," Eloi says. When they found a good location, Eloi says that's when they put themselves in order. "It was in a way that we wouldn't take that much attention from people," he says.

Eloi says they were approached by a few people who wanted to take pictures of them, but no one approached them to ask if it was a flag. He says, "They wanted to take photos with us, because they found it funny that six friends from six different countries were together. ... but nobody realized what we were doing. No one." 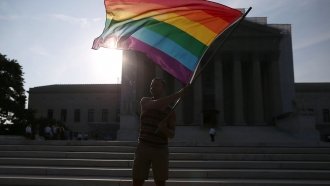 How The Rainbow Flag Became A June Staple

Eloi and the other activist had to keep the project under wraps.

"You couldn't speak up about what you're doing on streets because there was a lot of guards around," he says. To be clear, It's not illegal to be gay in Russia, but homophobia remains strong, and at times, Russian police have failed to prevent anti-gay harassment or attacks. FIFA advisers warn gay fans not to display public affection or participate in LGBTQ protests.

The Hidden Flag project was helmed by FELGTB, Spain's largest organization for LGBTQ rights. They took photos and videos for two and half days. But due to safety concerns, it was only after the activists came back to their respective countries that the images were shared.

"I knew that it could be tricky and dangerous. … It's something full of purpose it's a spreading of a love, a message about our nature. So for me, this is this is the kind of thing that is really exciting when I can do something that I truly believe," Eloi says. 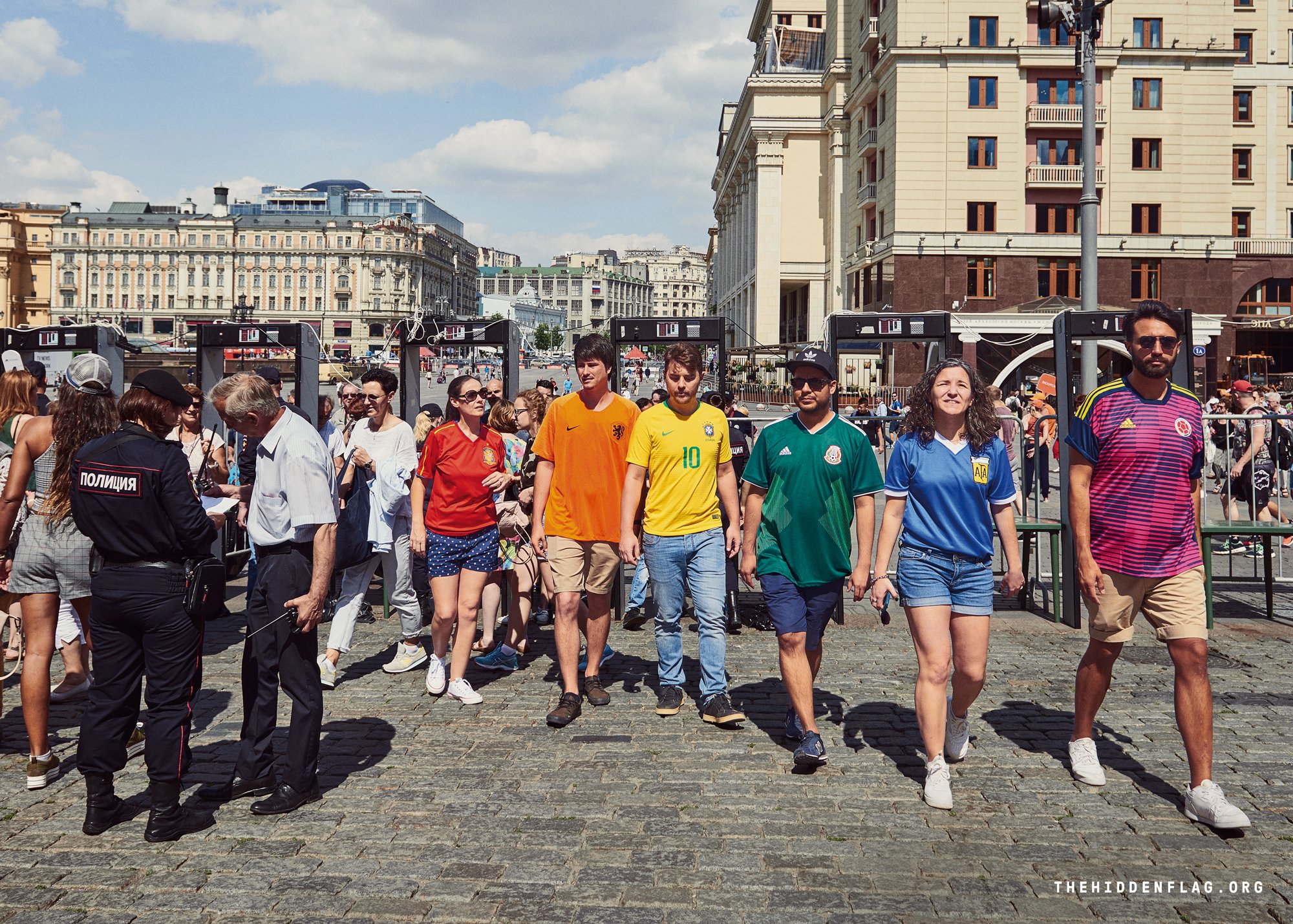 Seventy-two countries criminalize same-sex relationships. In eight of those, homosexuality can result in death. While gay marriages are legal in Brazil, Eloi says there are times when he doesn't hold his partner's hand in public for fear he might get attacked.

"In Brazil, for instance, a lot of the biggest publishers are giving us some space to talk about it. ... So and it's becoming very positive. ... Our first target, was to help the LGBT community in Russia, but it's becoming so huge that it might help a lot of people around the globe," Eloi says.

The Hidden Flag has received various supportive reactions from around the world. Eloi says he got emotional when he received 'thank you's' from gay people in Russia. He says, "We really wanted to spread this message around the globe for people to put themselves in a LGBT community's shoes, because we are humans as everybody else. And you just want to love and be loved."