It's Hard To Tell How Much Of The Amazon Is Burning 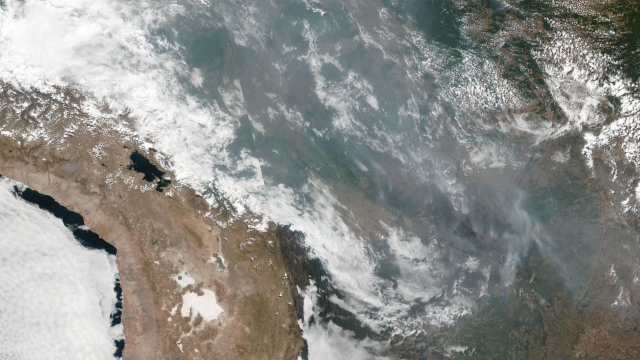 SMS
It's Hard To Tell How Much Of The Amazon Is Burning
By Evan Thomas
By Evan Thomas
August 23, 2019
Our best tools for measuring fires in remote rainforests can't always tell us how big the fires get.
SHOW TRANSCRIPT

A lot of the Amazon rainforest is on fire this year — fires are 83% more numerous than this time in 2018, according to Brazil's space agency. But it's hard to estimate just how much of the forest is currently burning.

The Amazon rainforest is so big that the most practical way to get an overview of the fires there is with orbiting satellites.

These tools are great for quickly spotting and counting the bright spots of fires, but they're not as good at watching those fires progress. A rep for the EU's Earth observation program Copernicus told Newsy it doesn't measure the geographical size of a fire, because its satellite eyes can't provide that information in near-real time.

Instead, it can be several days before a satellite is over the same location on Earth again. In that time, the area a fire has affected can grow and change.

But comparing satellite imagery from before and after could eventually show the extent of the fires. Experts are already tracking certain hot spots this way.

And the satellites do help measure fire impacts beyond area burned on the ground. Their data has helped scientists forecast the path of smoke from the fires, which now covers roughly half of Brazil and stretches almost all the way across South America.