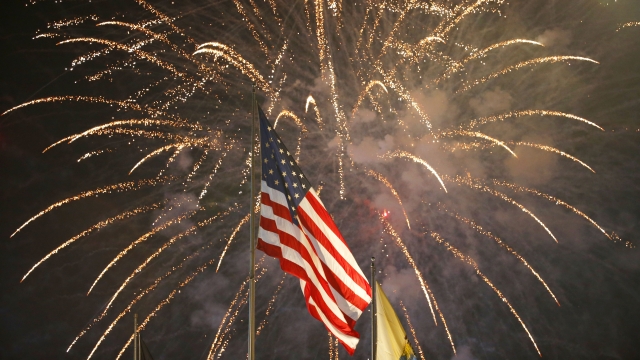 COVID-19 has transformed the way we celebrate holidays and special events, and the Fourth of July is no different.

As coronavirus cases surge across the U.S., this year's Fourth of July weekend is marked by increased restrictions.

Experts say if you plan on seeing friends or family, keep the fun outside.

"Think about having it outside as much as possible. If people need to go inside, make sure that they have opportunities to disinfect the surfaces that they touch," said Stephen Kissler, a postdoctoral fellow in the department of immunology and infectious diseases at Harvard's School of Public Health.

"If you're outside and just sort of walking past someone, if you're not masked there's not a very high chance that you'll spread it because that interaction is so short," said Kissler. "But if you're with other people for a very long period of time, especially at some sort of holiday gathering, even if you're outside, if you're not wearing a mask, then that still increases the probability that spread will happen."

Beaches in parts of California, Michigan, Delaware and Florida will be shut down.

Some cities in Arizona, Alabama and Colorado canceled their fireworks displays to prevent people from crowding together in public spaces.

"This July 4, we will not host an outdoor festival along Allen Parkway and Buffalo Bayou," Houston Mayor Sylvester Turner said at a news conference last month. "This was an easy decision, as the safety of Houstonians is our greatest concern, and as you know now, the number of people testing positive continue to increase every day."

And cities that are still putting on a fireworks show are urging residents to tune in from home.

"We want to send a message to our residents to enjoy the Fourth of July, to celebrate according to our guidance and to do it at home," D.C. Mayor Muriel Bowser said at a news conference last week.

The National Park Service says mask-wearing will not be enforced at the show on the National Mall but there will be plenty of space to social distance.

"We have a supply of cloth masks that we have available to distribute for those that are coming in. We're asking everybody to either bring their own or pick up one of the ones we've got and use them while they're out there. We have greatly increased the number of hand washing and sanitizing stations — I think we had 15 last year — we're up over 100 this year, so folks who during the day want to make sure that they're keeping their hands clean can do that," said Michael D. Litterst, chief of communications of the National Mall and Memorial Parks. "We're setting up portable toilets, concession lines to optimize social distancing, and of course we're asking everybody who comes in to properly socially distance throughout the day."