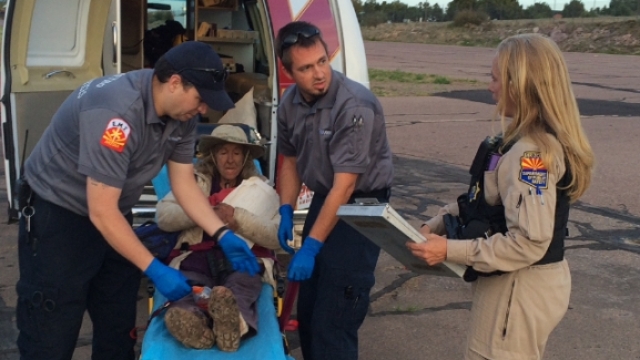 The two reportedly resorted to eating leaves and drinking pond water until a helicopter crew spotted the word "help" spelled out in rocks and sticks.

A 72-year-old woman and her dog were rescued after being stranded for nine days in the Arizona wilderness without food or clean water.

Ann Rodgers got lost on March 31 while traveling to visit her grandkids. Her car ran out of fuel in a remote area –– so remote that she said she came across no signs of life the entire time she was lost.

"I was eating desert plants. My dog was, too ..." Rodgers told CBS.

On April 9, an officer found Rodgers' dog. A helicopter crew then spotted the word "help" spelled out in rocks and sticks, and Rodgers was soon found nearby.

Rogers and her dog were in decent shape when they were found. In fact, Rodgers reportedly felt well enough to go on a hike a few days later.

Just two days before Rodgers was rescued, three men stranded on a Pacific island were saved after spelling "HELP" in palm leaves.

This video includes clips from CBS and images from the Arizona Department of Public Safety and the U.S. Coast Guard.