How These 3 Companies Already Won The World Cup 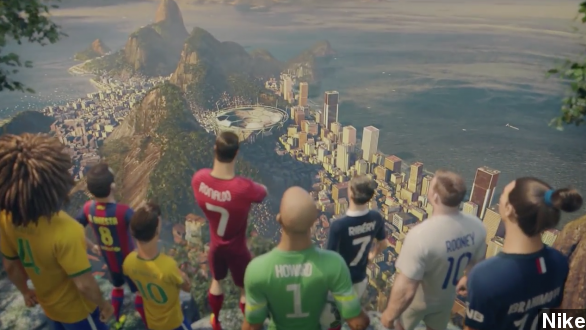 SMS
How These 3 Companies Already Won The World Cup

By Cliff Judy
July 8, 2014
While the championship match for the 2014 World Cup in Brazil hasn't been set yet, we already know who won the battle for coverage and ad dollars.
SHOW TRANSCRIPT

The field has yet to crown a champion. Tuesday and Wednesday's games will narrow the field to two. (Via Getty Images)

But we already have a pretty good idea who won the 2014 World Cup off the field. On the largest stage for the world's most popular sport, the players aren't the only ones with big-time pressure to deliver.

Granted, it's easier to deliver when you have exclusive rights to broadcast the games. ESPN broadcast the men's tournament for the sixth straight World Cup and gave U.S. viewers a strong showing. (Via YouTube / World Soccer Talk)

ESPN paid FIFA $100 million for the English-language rights to the 2010 and 2014 World Cups combined. (Via The Street)

Not bad when you consider NBC paid $775 million to broadcast the Winter Olympics in Sochi. (Via The Washington Post)

And when you shell out nine figures to exclusively broadcast an organization's product, it's easy to pull punches. While some have questioned whether ESPN fully covered protests surrounding the games, it's hard to question the cable network's journalistic integrity in at least one example.

The cable network aired an investigation prior to this year's games about the 2022 World Cup. Human rights organizations have called working and living conditions for migrant workers building stadiums in Qatar modern day slavery. (Via ESPN)

ESPN also got surprisingly high marks from one of its main competitors, Sports Illustrated. One writer complimented the broadcasts "featuring smart hosts and analysts, brilliant game-callers and studio programming geared toward soccer savants that novices can also appreciate."

Next up, an advertiser. Nike put a full press on its ad campaigns for the games in Brazil, a daunting task when you consider its main competitor Adidas is an official World Cup sponsor.

Soccer is the one sport Adidas has traditionally been able to trounce Nike in, but many now question whether the German-based company's soccer reign is over.

A writer for The Motley Fool notes, "Though Adidas is cheaper now, the company doesn't have the same growth catalysts Nike has. ... Most of all, Nike has the innovation to back up its price, as is evident in how much more prominent its soccer cleats are in this year's tournament."

A series of stories by Time, Inc. properties like Fortune, Time and Money point to Nike as the winner in these games. Money points out Nike shares easily beat out Adidas' growth in the past year before noting, "And in business, that’s really the only scoreboard that counts."

Finally, the traditional media also has its standout.

The New York Times has produced insightful coverage with a World Cup section that typically has something to click on despite only a few options in the way of video, perhaps a nod to not trying to beat networks at their own well-litigated game.

Before these games, The Times published an investigation into FIFA match fixing corruption. It alleged gamblers targeted as many as 15 games leading up to the 2010 World Cup in South Africa and profiled a referee who deposited $100,000 into a bank the day of a game.

The Times' Spot The Ball feature photoshops out the soccer ball in each picture leaving you to guess its location. We're admittedly still learning trajectories here at Newsy.

With some of the media and business winners already happy with their performances, I guess we can pay attention to what's happening on the field now.