Here's How The World Can Turn Back The 'Doomsday Clock' 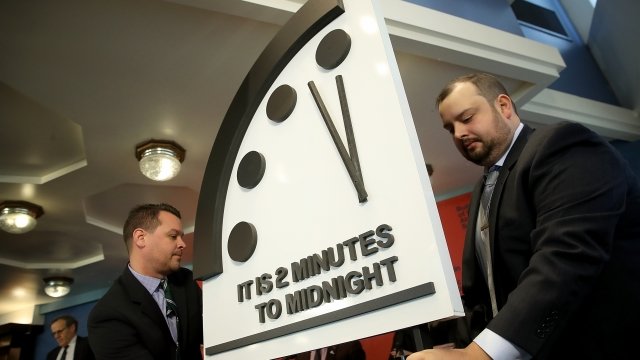 That's a symbolic recognition of the world's dangers and proximity to possible self-annihilation. As nerve-wracking as that sounds, the scientists working on the project say there are ways to turn the clock back.

For starters, the Bulletin of the Atomic Scientists says, "President Donald Trump should refrain from provocative rhetoric regarding North Korea." It also says the two countries should open up more diplomatic channels of communication and that world leaders should find a way to end the North's nuclear weapon and ballistic missile tests — in the short term, at least.

Beyond the issue of nuclear threats, the group says U.S. citizens should demand climate action from the government. Although the bulletin also says governments around the world should redouble efforts to reduce greenhouse gases, that bullet point for U.S. citizens is one of the few directed at normal folks not linked to the government.

Above all these points, the group says establishing new ways to "discourage and penalize" the spread of misinformation could help democracies better respond to the issues mentioned before.

At the end of the Doomsday update, scientists wrote: "[Citizens] can insist on facts, and discount nonsense. ... They can seize the opportunity to make a safer and saner world."