How The Watergate Scandal Still Affects Us Today 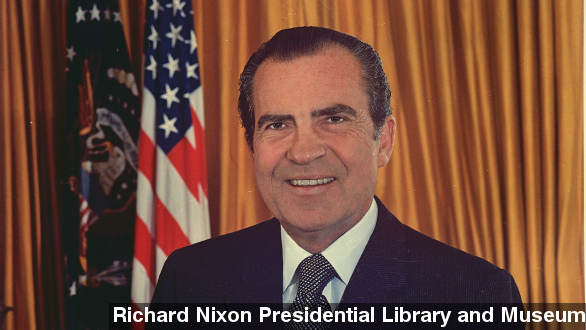 In a nutshell: There was a break-in at the Democratic National Committee offices in the Watergate office building in 1972.

Two Washington Post reporters, aided heavily by the infamous source "Deep Throat," looked into the incident. Bob Woodward and Carl Bernstein proved Republican President Nixon — who was seeking re-election at the time — had covered it up. They also found the robbers had been paid with money from Nixon's election fund. The incident eventually led to Nixon's near-impeachment and resignation. (Video via U.S. National Archives)

Watergate brought to light Nixon's hefty campaign donors and funds. Nixon had received millions from individual donors in both of his elections.

Nixon also was accused of keeping a campaign fund of about $18,000 for his personal use.

​After Watergate, campaign finance laws were created to restrict and regulate campaign donations. These laws require the disclosure of donors and put limits on how much a single donor can contribute, although the Citizens United case now has that issue simmering in controversy once again.

Watergate also made the threat of impeachment a political weapon.

Impeachment was meant as way to keep the government's checks and balances intact and provide a way for removal of the president if necessary.

The Constitution says it's only "Treason, Bribery, or other high Crimes and Misdemeanors"​​ that warrant impeachment.

Since Nixon, critics say the threat of impeachment has been used as a political tool for drumming up opposition to the president's political party or rulings.

And finally, the scandal often gets a lot of credit for changing journalism.

Woodward and Bernstein aren't just names — they're arguably the symbols of investigative reporting.

Politico said their stories "made journalism, which had been raffish and disreputable, glamorous and lucrative (if still disreputable), and accelerated the transformation of political journalists."

For you non-history buffs, Nixon got a full pardon from President Gerald Ford about a month after his resignation, but he is, of course, still the only U.S. president to resign from office.