How The US Could Hold Saudi Arabia Accountable In Khashoggi Case 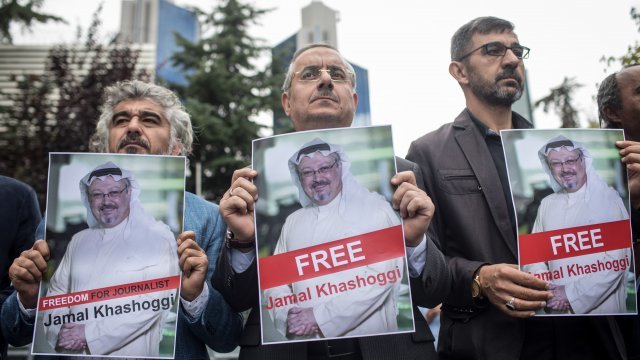 It's been two weeks since journalist Jamal Khashoggi, known for his columns criticizing the Saudi Arabian government, was last seen entering the Saudi consulate in Turkey.

While an actual account of what happened to him has yet to appear, members of Congress are coming out in force against Khashoggi's apparent murder.

If, in fact, Saudi Arabia is deemed responsible, many believe there should be consequences. What those would be is still up for debate.

In an op-ed, Kentucky Sen. Rand Paul, a vehement critic of Saudi Arabia, said he intends "to introduce another measure to cut all funding, training, advising, and any other coordination to and with the military of Saudi Arabia. ... This oppressive regime must be held accountable for its actions. The United States has no business supporting it, either directly or indirectly."

It's a sentiment echoed by others in Congress, including Bernie Sanders:

"One of the strong things that we could do is not only stop military sales, not only put sanctions on Saudi Arabia, but most importantly get out of this terrible, terrible war in Yemen led by the Saudis."

In a bipartisan letter to the president, all 22 members of the Senate Foreign Relations Committee triggered the Global Magnitsky Act, which would require the president to investigate whether a foreign person is responsible for killing or torture of someone exercising freedom of expression.

If the investigation turns up evidence Saudi Arabia is responsible, Congress could sanction individual people involved.

"I'm going to sanction the hell out of Saudi Arabia. We deal with bad people all the time. why would you put a guy like me and the president in this box after all we have done?" said Sen. Lindsey Graham.

These sanctions would likely be against any property or interest in property of those individuals. According to the Treasury Department, "U.S. persons are generally prohibited from engaging in transactions with blocked persons, including entities 50 percent or more owned by designated persons."

The Saudis aren't taking this lying down just yet. They have not claimed responsibility, though it's been widely reported officials will release a report stating Khashoggi was killed in an interrogation gone wrong. And not only have they rejected the threat of sanctions, but the Saudi government said in a statement that "if any actions are taken against the kingdom, it will respond with greater action."

Saudi Arabia is still the world's leading oil producer, and it's threatened an oil price increase to $100-$200 per barrel. Experts say actions taken by the U.S. could potentially have a more negative impact on the U.S. than on Saudi Arabia.

Additionally, the impact could grind the global economy to a virtual halt. Saudi Arabia could in turn buy arms from Russia and China.

Senior White House officials echoed the president's comments Tuesday afternoon, saying: "We have a long standing relationship with Saudi Arabia that is significant to us but that doesn't mean that we are downplaying this episode. We continue believe those responsible for it have to be held responsible."

Saudi Arabia also been an important player against Iran, and any actions taken against the country could push the two closer together.  Some members of Congress, like Sen. Rubio, say it's a risk they're willing to take:

"This would really blow apart our Middle Eastern strategy, and it is something we have to address from a human rights standpoint. Just because a country we are working with did it, the United States can't shrug its shoulder and say, 'Well, nothing happened here.'"