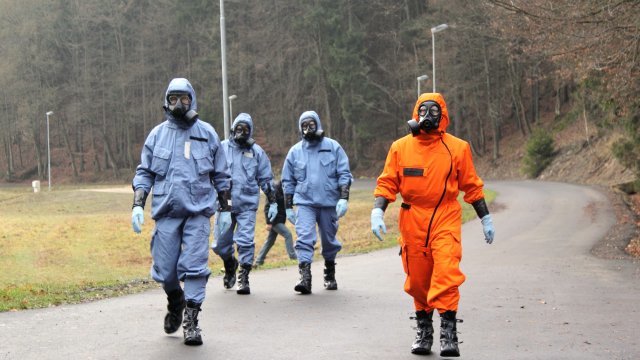 SMS
Here's How The UN's Chemical Weapons Watchdog Works
By Jake Godin
By Jake Godin
April 19, 2018
The OPCW is the United Nations' chemical weapons watchdog that's on the ground in Syria. Here's what you need to know about it.
SHOW TRANSCRIPT

The U.N.'s chemical weapons watchdog is on the ground in Syria to investigate an attack that reportedly left more than 40 people dead.

The Organization for the Prohibition of Chemical Weapons is also at the center of a geopolitical tussle between the U.S., United Kingdom and France and Russia, Syria and Iran.

Well, OPCW bills itself as an "independent, autonomous international organization" established in 1997. Almost every nation in the world is a member of the group. It essentially has one main goal — preventing chemical weapons from being used in warfare.

It does this by monitoring and helping destroy stockpiles of chemical weapons member states declare.

In 2013, the group helped identify and destroy Syria's chemical weapons stockpiles — at least the ones the Syrian government admitted to having. That work won OPCW the Nobel Peace Prize.

But reports of chemical weapons attacks in Syria kept coming after 2013 — namely chlorine attacks and, in some cases, what appeared to be nerve agent attacks.

Because of this, OPCW set up fact-finding missions to go to Syria and figure out if the reports of chemical weapons use were true. They were.

It's important to note these missions do not assign blame. That's up to something called the Joint Investigative Mission, or JIM, which was created in 2015.

JIM eventually blamed the Syrian government for using chlorine and sarin and ISIS for using a sulfur mustard weapon.

But Russia vetoed extending JIM in 2017. So while OPCW can assess the details of the chemical weapons attack in Douma, the United Nations technically can't point a finger at the culprit.