How The U.S. Plans To Dampen ISIS' Online Message 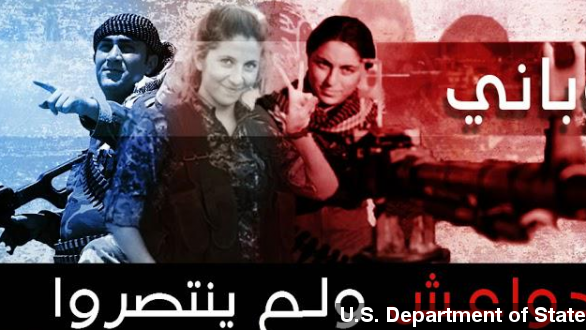 SMS
How The U.S. Plans To Dampen ISIS' Online Message
By Kate Grumke
By Kate Grumke
February 17, 2015
The U.S. is announcing a plan to streamline its online counter-terrorism efforts, according to The New York Times.
SHOW TRANSCRIPT

When the U.S. and 60 other countries meet to talk about violent extremism this week, countering ISIS propaganda online will be a top priority.

The recent rise in people traveling to fight with groups like ISIS has been at least partially attributed to the group's huge and impressive social media operation.

Right now, a few U.S. government agencies and outside groups are working separately to try to counter jihadists' online messages.

One of those agencies is the Center for Strategic Counterterrorism Communications, which Obama established back in 2011.

The center uses social media accounts in Arabic, Urdu, Somali, Punjabi and English to troll extremists online and tell them to "Think again. Turn away."

The accounts often respond to extremists with the U.S.'s own propaganda, as shown in this tweet from Tuesday.

According to The New York Times, the U.S. plans to expand the center and put it in charge of coordinating all of the different counter-messaging efforts by the U.S. government, foreign governments and NGOs.

But the center has had some criticism for its online efforts. SITE intelligence's director wrote in TIME that the tactic of trolling is "embarrassing." Saying, "This outreach by the U.S. government is not only ineffective, but also provides jihadists with a stage to voice their arguments — regularly engaging in petty disputes."

"Unfortunately, as we all know the government is probably not the best platform to try to communicate with the set of actors who are potentially vulnerable to this type of propaganda and this kind of recruitment," said Rasmussen.

The new U.S. plan is expected to be laid out during the White House's Summit on Countering Violent Extremism, which ends Thursday.