How The U.S. Fights ISIS From The Sea 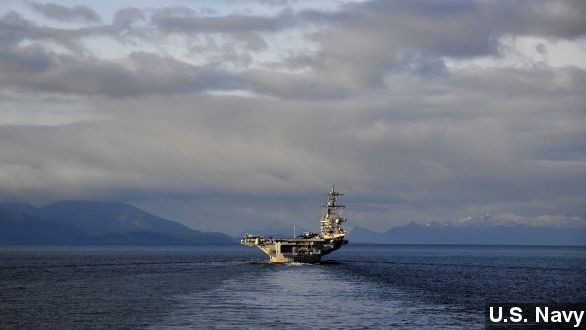 SMS
How The U.S. Fights ISIS From The Sea
By Jake Godin
By Jake Godin
December 16, 2014
More than a quarter of all airstrikes made against ISIS in Iraq and Syria have come from aircraft carriers like the USS Carl Vinson.
SHOW TRANSCRIPT

This is the USS Carl Vinson. In October, it relieved the USS George H.W. Bush in the Persian Gulf.

Since then, it's served as the home base for airstrikes against ISIS fighters, resources and bases in Iraq and Syria as part of Operation Inherent Resolve.

The $4.5 billion aircraft carrier is home to 2,100 personnel and more than a dozen jets worth $57 million each. According to a recent report by The New York Times, more than a quarter of the 1,200 airstrikes made against ISIS so far have been from a carrier.

Aircraft carriers like the Carl Vinson allow the U.S. to launch airstrikes from locations where it would otherwise need access to an airbase. As one vice admiral told the Times, the Carl Vinson is "five acres of sovereign U.S. territory."

Fox News reported in late November U.S. fighter planes and drones had performed 819 of the airstrikes against ISIS so far, or almost 85 percent of the total airstrikes made by the U.S.-led coalition against the militant group.

According to the Syrian Observatory for Human Rights, coalition airstrikes have killed more than 900 people since they began in August. Though most have been militants, the Syrian watchdog did document 52 civilian casualties. (Video via RT)

In a December address at Joint Base McGuire-Dix-Lakehurst, President Barack Obama said, "Along with our coalition partners, we are hammering these terrorists, taking out their fighters, their commanders, hundreds of vehicles and tanks."

ISIS militants aren't the only targets for airstrikes, though — there's a wide range of reported objectives. Everything from construction equipment that could be used to fortify positions to "electronic warfare garrisons," which U.S. Central Command said was the target of a strike in November.

According to a Miltary.com report in November, coalition airstrikes have hit more than 2,300 ISIS targets including 700 ISIS-occupied buildings, 380 fighting positions, 260 vehicles and 180 "black market oil-related targets."

All of these U.S. airstrikes do come at a price, though — about $7.6 million per day, according to the Pentagon's assessment. A September estimate by the Center for Strategic and Budgetary Assessments projected the annual cost will be somewhere between $2.4 billion and $6.8 billion. (Video via U.S. Department of State)