How The Tea Party Inspired This National Progressive Movement 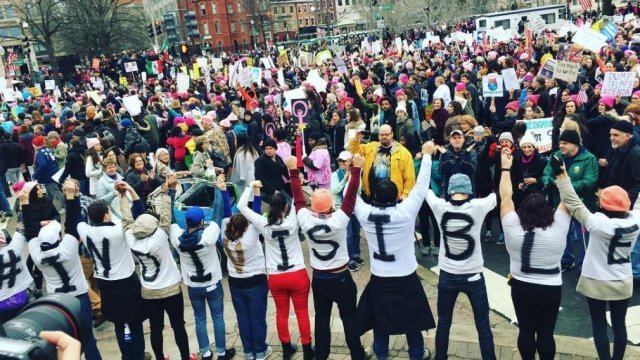 SMS
How The Tea Party Inspired This National Progressive Movement
By Jamal Andress
By Jamal Andress
November 2, 2017
From a simple Google Doc to a nationwide progressive movement with over 6,000 groups, the co-founder of Indivisible tells her story.
SHOW TRANSCRIPT

As President Donald Trump and the Republican Party get ready to push for tax reform across the country, the administration has yet to sign a piece of major legislation into law.

"Nothing Donald Trump does over the next four years really depends on Donald Trump alone. It depends on whether your members of Congress, your congressperson and your two senators allow him to do that. … So you, as a constituent, have enormous power," Indivisible co-founder Leah Greenberg said.

Greenberg is the co-founder of Indivisible, a progressive network of thousands of local groups dedicated to "resist[ing] the Trump agenda." Indivisible has protested the president's travel ban, the defunding of Planned Parenthood, efforts to repeal Obamacare and much more. 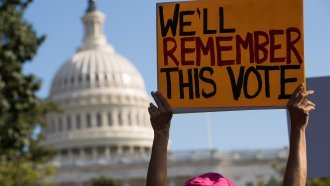 Indivisible reportedly has a volunteer-led and organized chapter in every congressional district in th U.S., from South Carolina to Arizona — more than 6,000 groups nationwide.

"So immediately after the election, my husband, Ezra, and I were going through the stages of grief like a lot of progressives, and we were just trying to figure out what we could do to respond to the incoming administration," Greenberg said when asked about how Indivisible got started. "We went back to our early years as young congressional staffers on the Hill during the beginning of the Obama era when we worked for Democrats and faced this really determined local advocacy movement, the tea party. After the election, we had this realization that there might have been some lessons in that period for what we saw as this emerging wave of grass-roots activism."

So taking inspiration from a former foe, Greenberg put together a small Google Doc expressly modeled after the tea party's tactics. Ideally, it would help progressive activists push back against the Trump administration's agenda by pressuring their local officials to push back.

"We thought that, like, our friends would like it on Facebook and in six months maybe somebody would send us an email and say, 'Hey, I used your guide,' and we would be really excited. That was success for us," Greenberg said.

But now success looks a lot different. The Google Doc went viral and then crashed before Greenberg and her husband realized their guide was making its way across the country. Indivisible chapters started popping up all over, and these newly politically active volunteers had questions.

"We started trying to be sort of a help desk to all of the folks who were coming to us, and we realized at some point we couldn't do that forever as volunteers," Greenberg said. "In December, we put the Google Doc out. And then my husband quit his job in January; I quit my job in March. We started actually paying people salaries and becoming a real organization in April."

Much like when the tea party entered the political conversation in 2008, you can now see Indivisible's influence at local rallies, town halls and protests.

"I think our original theory of change was pretty explicitly modeled on the tea party, which was local action that was really directed at your local officials, and it was defensive in nature. They were a primarily defensive and reactive entity," Greenberg said. "So for us, resistance right now is playing defense against those things while also keeping in mind the fact that, ultimately, we want to build something better. We have to go forward, and we have to do something more meaningful."

Greenberg and her team at Indivisible hope to address that concern with a new division of the company.

"Folks who had gotten together to advocate to their elected officials did not make a big distinction between going and lobbying their member of Congress and then deciding, 'Hey, my member of Congress isn't listening to me; it's time to think about a new member of Congress.' We knew that there was a lot of energy and interest in turning and getting more electorally focused," Greenberg said.

So like most of the political world, this activist network also has its sights on 2018.

"I think it's the million-dollar question, right? How do we turn the emotional reaction to November 2016 to long-term, meaningful, progressive power? One of the the things we say again and again is it's a marathon, not a sprint. And then sometimes we say it's a relay race, not a marathon because it's about doing your work, taking a pause, coming back in when you're rested and ready. It's gonna be a long couple of years, so we want folks to be in it for the long haul," Greenberg said.