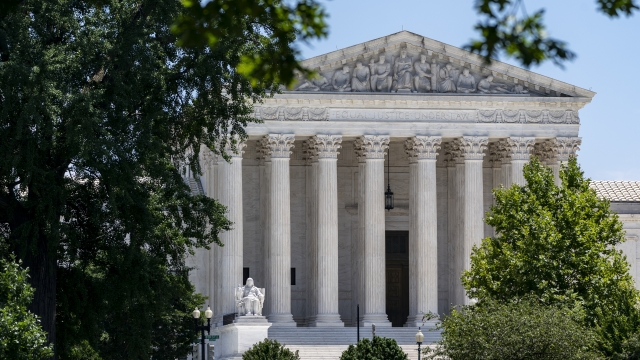 The Supreme Court is the highest court in the land.

And its rulings have shaped the United States for over two centuries.

Some recent decisions have put a spotlight on the high court.

"The court is literally taking America back 150 years. It's a sad day for the country in my view," said President Joe Biden.

"It's not only a huge victory for innocent life. It is a historic triumph for the rule of law itself," said Minority Leader Mitch McConnell.

The decision wiped away the 1973 ruling and handed jurisdiction over abortion back to individual states.

From coast to coast, the reversal drew celebration from some, and protests from others.

But it wasn't the only blockbuster decision in the high court's latest term.

The nine justices struck down a New York concealed carry law that aimed to limit guns in public.

It also decided the Environmental Protection Agency could not regulate carbon emissions from power plants.

And it voted in favor of a former high school football coach and gave him the right to publicly pray on the field after games.

All were sweeping decisions that cemented the court's 6-3 conservative majority.

It comes as polling has found public approval is at an all-time low.

Only 25% of Americans have confidence in the Supreme Court, according to Gallup.

That's a dive of more than 10% compared to the same time last year.

Precedent has played a crucial role in the Supreme Court since it took shape in 1789.

The Judiciary Act of 1789 established an early version of the three-tiered federal court system of district courts, circuit courts and the Supreme Court.

And the court's more than 230 year legacy largely remains in its original form, despite a few amendments.

Six men made up the nation's first Supreme Court.

The president nominates justices, but Congress decides how many justices are on the bench.

That number changed a total of six times before lawmakers settled on the current nine justice makeup in 1869.

Following the most recent term, several progressive Democrats want to expand the court to 13 justices.

"We need to expand the Supreme Court and here's why: for decades, the Republican party has been chipping away at the foundation of our democracy. They use broken rules like the filibuster and the Electoral College to control the White House and Congress," said Senator Elizabeth Warren.

But an NPR-Marist Poll in June found a majority of Americans oppose adding more justices to the bench.

Only about one third backed an expansion.

The Senate is responsible for confirming the president's Supreme Court nominees.

When sworn in, justices are appointed for life.

The Constitution says "to ensure an independent judiciary and to protect judges from partisan pressures, the Constitution provides that judges serve during "good behavior," which generally means until justices retire or die.

However, the Constitution does not specify qualifications for justices.

The Supreme Court says they can be any age, have any education or profession.

A justice doesn't even have to be a lawyer or a law school graduate.

But historically, all have been trained in the law.

Unlike other court figures, the U.S. Supreme Court is the only judicial body in the country that does not have to follow an ethics code.

But they aren't really allowed to act unethically. If they do, that could result in impeachment.

There is a statute that requires justices to recuse themselves from a case if there's a conflict of interest.

Article 3 of the U.S. Constitution gave the U.S. Supreme Court jurisdiction over all U.S. laws, especially in cases that involve a law's constitutionality.

It has the power to decide appeals on all cases brought in federal court or in state court if they deal with federal law.

The court's term begins in October, and the justices will hear oral arguments for the next seven months.

In those hearings, lawyers for each side lay out their legal case.

The court will typically discuss the cases with their law clerks to identify different views and form an idea of how they'll vote.

The justices then hold private conferences to decide the case.

Supreme Court protocol says all justices have an opportunity to share their views without interruptions.

Once the votes are in, the most senior justice in the majority and minority decides who will write the court's opinion.

Those opinions don't become final until the ruling is made available to the public.

Justices have long held true to confidentiality and are not subject to the federal "Freedom of Information Act."

Oral arguments have never been televised.

And it wasn't until 2020 that the court began offering live audio from inside the courtroom.

But despite any controversy around a case, the court pledges to uphold its ultimate responsibility, the one written above the court's main entrance in Washington: "equal justice under law."