How The President Wants To Expand Access To Solar Power 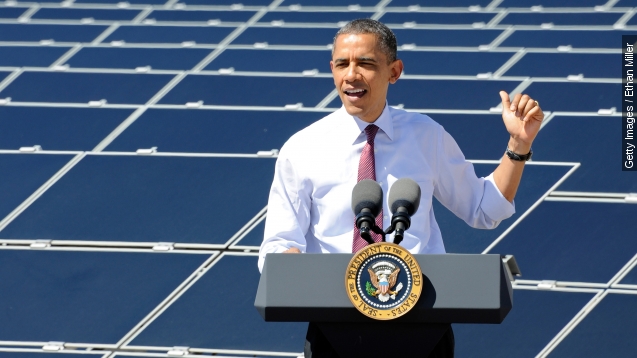 The president's multifaceted plan to put solar panels in low-income communities is the administration's latest push for renewable energy.

The Obama administration is boosting access to solar energy for low- and middle-income communities. (Video via The White House)

The plan calls for loans for solar panel installation, a nationwide program to provide solar energy to renters and tripling planned solar power in federally subsidized housing by 2020. (Video via Which?)

On top of those executive actions, $520 million in commitments from the public and private sector entities will help install solar paneling in low-income communities.

The average solar energy system costs around $10,000, a roadblock for renters and low-income homeowners interested in renewable energy. (Video via Missouri Wind and Solar)

Obama has been pushing for energy reform for a long time.

"Using fuels we can grow right here on our shore, we can reduce our oil imports by more than 7.5 million barrels a day," the president said in 2006.

"And I've called for investments in solar, wind, geothermal," President Obama said on the campaign trail in 2008.

"If we do our part right now to rebuild an economy and transition to a clean energy future, we will create more jobs, we will reduce our dependence on foreign oil and we will leave our children with a better America and a better future," he said last May.

In some sense, President Obama's vision is supported by the decreasing price and growing popularity of solar panels.

But some, including Bill Gates, argue renewable energy isn't used enough to impact the environment or the economy.

"We need to get the message out, we need to have this dialogue be a more rational, understandable dialogue, including the steps that the government takes," Gates said.

Maybe that's why the president has been ramping up his focus on renewable energy in recent months.

"We've got to lead by example. Invest in the future," President Obama said in April.

The new proposal comes a few months after the president announced a plan to train 75,000 people for the solar workforce by 2020. Both initiatives are part of a broader plan to use his remaining time in office to solidify the administration's clean energy legacy.