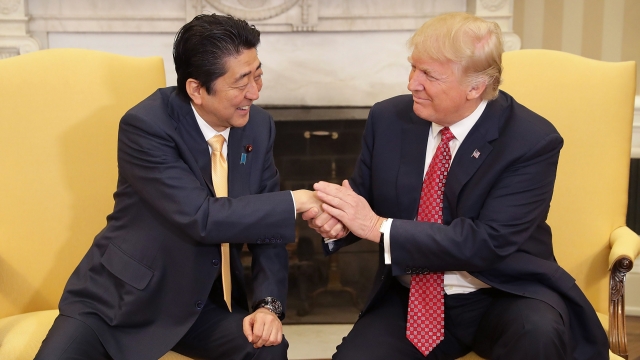 SMS
How the U.S.-Japan Trade Deal Stacks Up Against The TPP
By Gage Jackson
By Gage Jackson
October 8, 2019
The beef and pork industries can consider the new trade deal with Japan a major win, but some dairy and rice farmers may not be so lucky.
SHOW TRANSCRIPT

The U.S. signed two new trade deals with Japan on Monday, which President Trump has called "a huge victory for America's farmers, ranchers, and growers."

The purpose of one deal is to help restore Japanese market share for U.S. farmers, which has been lost to competitors in Australia, Canada, New Zealand and several countries in Europe.

But how does this new deal compare to the Trans-Pacific Partnership, the deal President Trump abandoned on his third day in office?

The full text of the new deal was released Monday. It showed some agricultural products will have a tougher time accessing the Japanese market than they would have under the TPP.

Take butter, for example: When the U.S. pulled out of the TPP in 2017, that left market space open for brands like New Zealand's Anchor butter and Australia's Western Star to take over. In the new deal, Japan refused to grant American butter the same quota that was set under the TPP, so it won't have the same access to the market that was guaranteed to those foreign brands.

American rice farmers won't benefit from the new trade deal, either. Japan will continue to impose a whopping 778% tariff on rice from the U.S. Under the TPP, Japan would have imported 70,000 metric tons of American rice per year with zero tariffs, but that's not part of the new deal.

Cheese, however — the largest U.S. dairy export to Japan — will remain consistent with TPP standards and see an elimination of tariffs up to 40% over 15 years. Wheat will also match old guidelines, and Japan will reduce the markup on American wheat by 45%.

But the biggest advantages from the deal will go to beef and pork exporters. Japanese tariffs on American beef will fall nearly 30% by 2033, and pork tariffs will be completely eliminated over the next nine years.

Overall, some industries will see vast tariff reductions on their products, while others will face tougher access than they would have under the TPP.