How The Michael Sam Pick Could Help Change Mo. Law 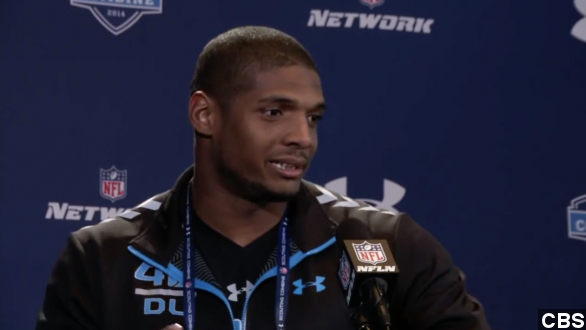 By Adam Falk
May 13, 2014
The Rams' decision to draft Michael Sam could help push nondiscrimination legislation through the Missouri House.
SHOW TRANSCRIPT

But reports indicate his selection could also pressure Missouri lawmakers into changing the way the state deals with couples and employees who are gay. (Via ESPN)

Sen. Claire McCaskill shared this tweet Sunday, which says, "Michael Sam could still be fired for just being gay according to current Mo law.Let's fix that in JeffCity." (Via The New York Times)

​One potential fix, according to lawmakers, is House Bill 1930.

According to the St. Louis Business Journal, if passed, 1930 would add sexual orientation and gender identity as protected categories under the Missouri Nondiscrimination Act. Right now, they are not.

KSDK spoke with the board president for the LGBT Community Center of Metropolitan St. Louis, who added: "There is no protection from being asked, 'By the way, are you gay?' And being explicitly told, 'You know, we don't hire gay people.'"

But Sam’s return to Missouri has supporters like Missouri State Rep. Mike Colona feeling optimistic. "The simple fact that now we have Michael Sam here playing in the home state in the city of St. Louis for the Rams, I think, will do a lot to bring us further into the 21st century." (Via The Huffington Post)

Sports and politics are undoubtedly intertwined in Sam's case. And that could add some stress to the fact that though Sam was drafted, he still has to make the team.

KTVI spoke with Rams COO who said, "Our goal is Michael Sam has to help us win football games. He's here as a football player, not as a social experiment."

​The former Missouri Tiger was named SEC defensive player of the year in 2013 after posting stats like 11.5 sacks and 19 tackles for loss. (Via CBS)

Training camp begins July 25. Meanwhile, House Bill 1930, which went before the House in March, has yet to pass.