How 'The Hunger Games' Is Keeping Thai Protests Alive 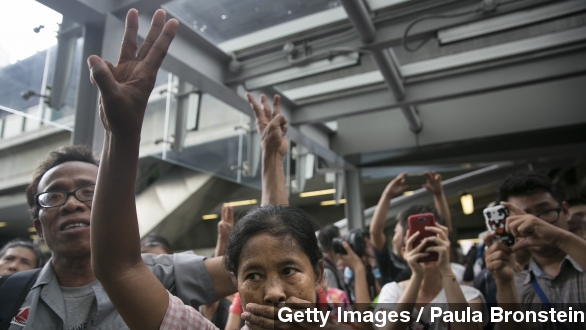 SMS
How 'The Hunger Games' Is Keeping Thai Protests Alive
By Christian Bryant
By Christian Bryant
November 19, 2014
Despite a government crackdown, the film's three-finger salute is such a popular form of protest some theaters have opted not to show "Mockingjay."
SHOW TRANSCRIPT

Law enforcement in Thailand detained five university students Wednesday who might've looked more like oppressed residents of the fictional Panem than protestors of a recent military coup. The students were taken away for flashing the three-fingered salute made popular by the "Hunger Games" series.

Thailand's prime minister was speaking at an event in the northeastern part of the country Wednesday. That's when the students revealed T-shirts with language opposing the coup and then flashed the salute.

Many outlets, including us, reported in June that Thai protestors were taking this young-adult novel symbolism to the streets after the theatrical debut of "Hunger Games."

That same month, a Quartz writer said the choice of symbol for this movement seemed appropriate. "Thais are avid consumers of pop culture, including the Hunger Games movies, so it’s not surprising that they have chosen to use the salute favored by cinematic heroine Katniss Everdeen."

But since then, the military government has implemented martial law and the protest symbol has rarely been seen.

As a part of that martial law, CNN reports military government "imposed a series of measures purportedly aimed at restoring order and resolving the crisis, including media blackouts, curfews and bans on public assembly."

Just last week, military authorities reportedly marched into a Thai public broadcasting station and ordered the suspension of a journalist for reporting critical of the government.

But the symbol seems to have re-emerged just as the new "Hunger Games" film is set to hit theaters. The Bangkok Post reports the Lido and Scala theaters in Bangkok have even decided not to show "The Hunger Games: Mockingjay, Part 1" for fear of "political backlash."

Reporting on the symbols used during similar protests, a Washington Post writer said gestures like the "Hunger Games" salute recall "significant moments in history" and is an instant identifier "to a united cause."

Taking that into consideration, both the recent protest and the newest "Hunger Games" film could help keep opposition to the government in the public's focus. According to the BBC, the military says it will eventually hold a general election and hand power back to Thai citizens in 2015.