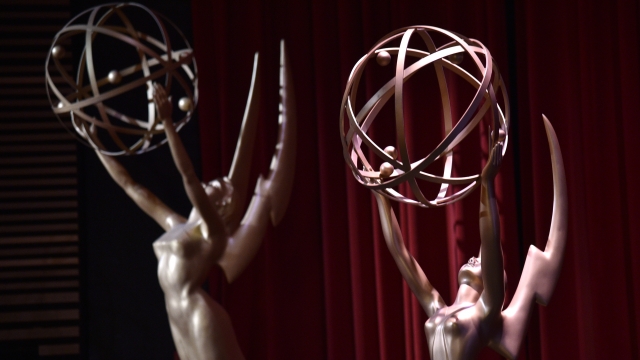 Lauren Magarino: "The Primetime Emmy Awards are this weekend, so get ready to see all your favorite television stars in a more relaxed setting. Katherine Biek is back to dive into it all with me. Katherine — how is the award show being set up in order to keep everyone safe?"

Katherine Biek: "By not having everyone gathered together, Lauren. Nominees, presenters, performers — they've all been sent laptops and cameras; everything they need to be filmed live in their homes around the globe. Those feeds — about 130 of them — are going to be fed back to the Staples Center, where host Jimmy Kimmel is going to be located. This way, the majority of the show can happen live. It's gonna be like one big Zoom call. And Emmy rules actually state that even the show's producers can't know the winners before the ceremony. So all award presentations will be happening in real time, and hopefully the winner has a strong enough internet connection so they can give their speeches. Now will this be a train wreck? Producers say, possibly. But it could be what the award show needs. Viewership has been tanking the last several years, Lauren. Just seven million people tuned in to watch last year, which was a record low."

Magarino: "If I was a producer having to work on this show, I would be so stressed having to rely on Zoom or just anything with the internet. Honestly, good luck to them. But what categories should viewers keep their eyes on Sunday night?"

Biek: "Definitely the outstanding drama series. 'Game of Thrones' has swept this award the last four years it was eligible, and now that the show is finished, this race is finally wide open. Contenders include 'The Crown,' 'Stranger Things,' 'Ozark,' and 'Killing Eve.' Another big one is the outstanding comedy series. Networks have been canceling comedy shows right and left this year. It's like no show is good enough. So whichever show ends up winning this category, it could give us some insight into what comedy format Hollywood thinks is still working. Nominees include 'The Marvelous Mrs. Maisel,' 'The Good Place,' 'Dead to Me,' and 'Schitt's Creek,' one of my personal favorites. And finally, I think it's always smart to keep an eye on how many awards streaming services end up taking home. Those streaming shows are finally starting to be seen as acceptable art in Hollywood and Netflix scored a record 160 nominations this year. But don't discount Baby Yoda and 'The Mandalorian.' That show has already won five Creative Emmy Awards for Disney Plus, despite only debuting back in November. And it's up for several drama awards Sunday night, Lauren."

Magarino: "All right, I'm excited for this. I think I just might tune in. And I also am keeping my fingers crossed for 'Schitt's Creek' because I think that show is hilarious. Newsy's Katherine Biek. Thank you."