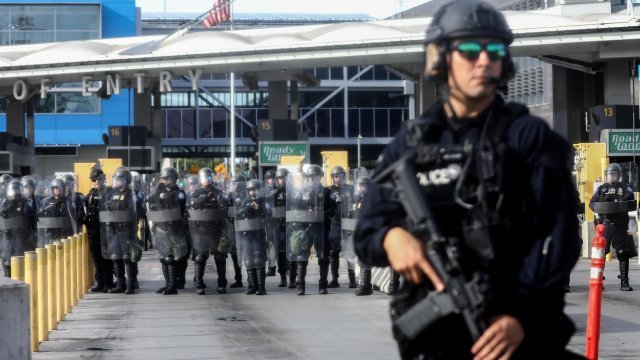 SMS
How The Economy Would Be Impacted If Trump Really Closed The Border
By Ben Schamisso
By Ben Schamisso
March 29, 2019
Because Trump keeps repeating the threat, experts are weighing in on what closing the border would look like from an economic standpoint.
SHOW TRANSCRIPT

For the seventh time in five months, President Donald Trump has threatened to close the southern border — or "large sections" of it — "if Mexico doesn’t immediately stop all illegal immigration."

"We'll keep it close for a long time. I'm not playing games."

This time, he says he would do it as early as next week.

Legally, it would be difficult for the President to close all or parts of the border. And such a move would certainly spark lawsuits.

"He cannot legally do it ... We know that because of federal statutes."

But because Trump has repeated the threat so many times, experts are weighing in on what closing the border would look like from an economic standpoint.

"Shutting down the southern border would cost up to a billion dollars a day. Is the President seriously willing to do that?" "Yes."

Without citing evidence, Trump said last year that closing the border would actually be a "profit making operation." He reasons that it would halt imports of Mexican auto parts, forcing automakers to bring manufacturing jobs back to the U.S.

However, economists say stopping the large flow of goods and people who cross the southern border every day would greatly hurt the U.S. economy.

Nearly a half million people enter the U.S. every day through that border.

And more than $500 billion in goods went across the border in both directions in 2017, according to CBS News. That makes Mexico the third largest trading partner for goods, behind Canada and China.

Disrupting trade between the U.S. and Mexico would most likely result in price surges for all imported goods.

The director of the Wilson Center's Mexico Institute told CNN: "At a time like this when already the stock markets are reeling because of trade talks with China, when a lot of people are talking about the U.S. economy going into recession, do you really want to do something that that's going to send shivers throughout the economy?"

In the past, the President's threats were meant to pressure Democrats to agree to fund his wall. But his new threat to close the border, while directed at Mexico, also came a day after he referred to the high number of asylum seekers at the border as an "invasion."

As Newsy previously reported, apprehensions and unauthorized arrivals at the U.S.-Mexico border were at a 12-year high in February.