How The Black Market Could Aid Conservation Efforts 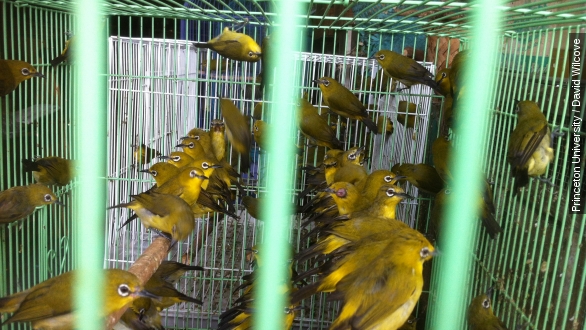 One of the biggest threats to a lot of endangered wildlife — both fauna and flora — is the black market. (Video via International Fund for Animal Welfare)

The illegal wildlife trade constitutes billions of dollars in trade of products ranging from illegal ivory to exotic pets. (Video via Interpol)

Now, researchers say, the scientific community might need to get its hands dirty to help stave off the effects of this trade. (Video via BBC)

No, we're not talking about researchers going undercover, Ace Ventura-style. It's not quite that exciting. (Video via Warner Bros. / "Ace Ventura: When Nature Calls")

Instead, researchers from Princeton University suggest in an upcoming paper that scientists should use the black market itself as a bellwether to see what animals are most at risk. (Video via YouTube / Free Animal Video)

The researchers looked at bird markets in Indonesia and identified a trend: As prices increased and availability in the market decreased, the population in the wild decreased as well.

Of the 38 species of birds the researchers examined, the 14 they listed as declining or severely declining were all regularly traded in the markets. (Video via Princeton University)

The researchers say one problem scientists face is in some areas where the illegal wildlife trade hits the hardest, there's a lack of population data for threatened species. (Video via The Humane Society of the United States)

They suggest information on prices in the market, like they used in their research, could help solve that problem. Their research is set to be published in the journal Biological Conservation.

This video includes an image from florador / CC BY NC 2.0 and music by Chris Zabriskie / CC by 3.0.