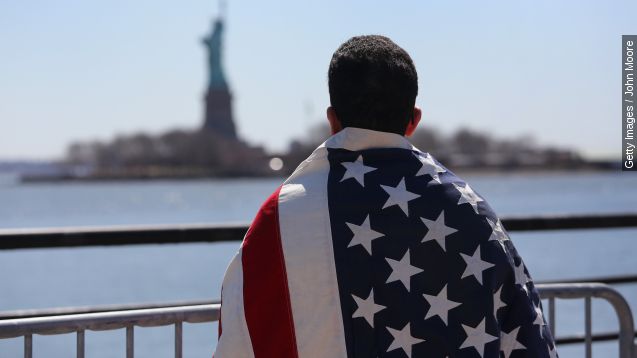 "If it weren't for me, you wouldn't even be talking about illegal immigration. … We need to build a wall," Donald Trump said.

"When we do overall immigration reform, I'm willing to put anything on the table for discussion," Gov. Chris Christie said.

"We have been taking about illegal immigration for 25 years," Carly Fiorina said.

That's thanks in part to the Immigration and Nationality Act of 1965, which got rid of a quota structure that favored European immigration over people in regions such as Asia.

The act replaced the quotas with a system geared more toward people's individual qualifications, skills and family ties in the United States.

The law's effects boosted several underrepresented demographics within the U.S. Fifty-nine million immigrants have arrived to the U.S. since the act was set in motion, and more immigrants have come from Mexico, Honduras, China and the Philippines.

According to the U.S. Census Bureau, Hispanics account for 17.4 percent of the population and Asians account for 5.4 percent. It's not clear if that was the effect President Lyndon B. Johnson had in mind when he signed the act; he insisted at the time it was "not a revolutionary bill."

And the immigrant community is only growing. According to the Pew Research Center, between 2015 and 2065, immigrants are projected to account for 88 percent of the country's population increase.

There are an estimated 11.5 million undocumented immigrants in the United States, and they make up just over 5 percent of the labor force. Around 316,000 people were deported last year.