How The 2016 Race Is Playing Out En Español 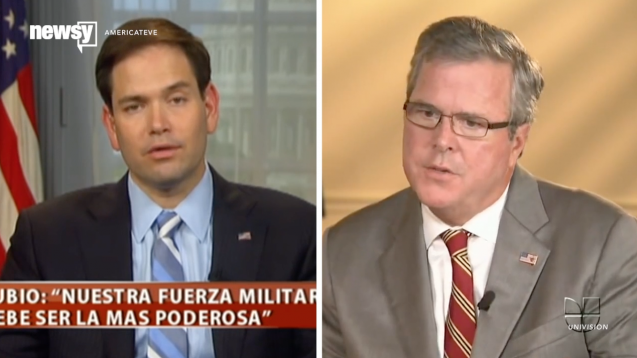 SMS
How The 2016 Race Is Playing Out En Español
By Kate Grumke
By Kate Grumke
July 25, 2015
Hillary Clinton doesn't speak Spanish, but four of her Republican rivals have a grasp of the language and some are using it to their advantage.
SHOW TRANSCRIPT

That was Hillary Clinton in 2008 using some of the few words of Spanish she knows.

And in 2016, not much has changed. (Video via Hillary Clinton)

But this time around, many of Clinton’s potential Republican competitors have at least a grasp of the language 13 percent of the country speaks at home.

Marco Rubio regularly gives interviews in Spanish, although his campaign website and social media don’t feature his language skills prominently. He learned Spanish from his parents who immigrated from Cuba.

And Jeb Bush speaks Spanish almost exclusively at home with his Mexican-born wife and their children. He’s fluent enough to do interviews like this one on Univision.

Bush’s campaign website is in Spanish and English, and he regularly features videos of himself speaking Spanish on social media.

Plus, another two Republican contenders speak what they describe as Spanglish.

"I’m going to invite you to address your colleagues en espanol.""I’m going to stick to English, senor," said Ted Cruz.

Spanish skills won’t win many votes on their own — in a recent Univision poll, 68 percent of Hispanic voters said a candidate’s Spanish skills won’t influence their vote, but the prospect of a GOP field with the ability to tap into a growing demographic has Democrats worried. (Video via Right to Rise)

President Obama’s strategist David Axelrod told MSNBC Bush and Rubio scare him the most, "because of their ability to reach into the Hispanic vote … One of the reasons why Democrats have had an advantage in these national elections is because of the advantage we’ve had with minority voters."

And Clinton’s campaign definitely isn’t shying away from Spanish, even if she doesn’t speak it herself. Tweets like this one and bilingual videos are all part of her online strategy.

But whether it comes down to Spanish outreach or stance on the issues, Clinton is leading the election among Hispanic voters with 64 percent. Her closest Republican rival is Bush, with 27 percent, according to Univison.

This video includes Getty Images and music by Kevin MacLeod / CC by 3.0.