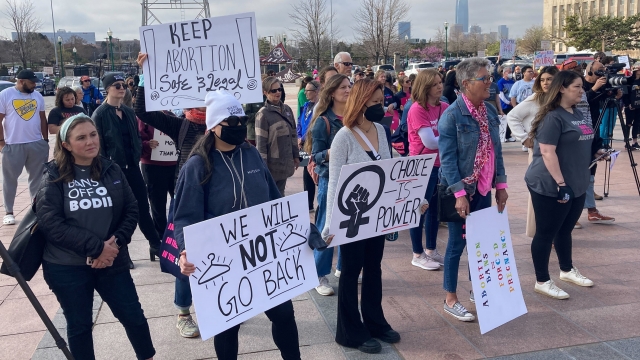 For some women, it's the only available option within hundreds of miles to seek an abortion.

"We've been doing it for years, but now all of a sudden we have to say we're not able to, and instead, we're helping them get out of state," said Dr. Bhavik Kumar, a family physician at Planned Parenthood Gulf Coast.

For decades, conservatives in the state have chipped away at abortion access, and restrictions have shut down many clinics.

In 2021, Texas lawmakers effectively banned termination of pregnancy after six weeks, even though medical experts say most women won’t know if they are pregnant in that time period. They also passed more restrictions on medicated abortion, which typically uses two pills to end a pregnancy.

"But now our hands are tied, and having to say no to somebody, especially when I have the medical training and the expertise to provide that care," Dr. Kumar said. "We've got the team of nurses and the staff and the techs, everyone available to do what they need to make them feel better and to make all the other things in their life somewhat better, and we're not able to do that."

In a report, the University of Texas policy evaluation project says the law’s effect reduced abortions in the state by about 50% — around 2,100 in September of 2021.

It also says there are only 24 facilities for a state of 29 million people, forcing many women to travel out to places as far away as Colorado.

Dr. Rebecca Cohen from the Comprehensive Women’s Health Center in Denver says some women travel hours to seek abortion care, with up to 20% of their patients being from Texas on some days. The demand surge has lengthened wait times, as other surrounding states are following the Texas law.

"As hard as it is to kind of look to the horizon and see the tsunami, we know that it's coming," Dr. Cohen said.

The wave reproductive health providers expect is that the conservative-leaning Supreme Court could overturn Roe v. Wade — the landmark decision which legalized abortion.

"We know what happens when abortion is banned," Dr. Kumar said. "We know that people will continue to need access to this care, so we're not going anywhere. We'll continue this fight. But I think and what I hope will come out of this is more people will understand how critical abortion access is for people's health care and for families and for communities, and that we will begin to turn the tide the other way."

It'll be an uphill struggle for abortion rights in Texas, as anti-abortion conservative Republicans dominate the legislature. The Texas laws have also created an underground network of sorts, with many legal funds and confidential logistical operations, to help women without the means find abortion clinics out of state and help them travel there, or to help women find access to medicated abortion.