How Syrian Refugee Kids In Chicago Are Celebrating The Holidays 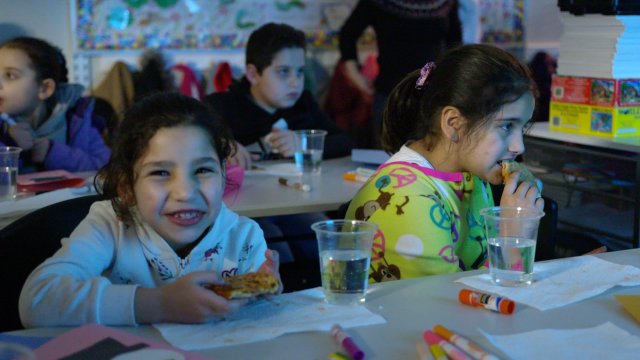 The celebration is part of an after-school program hosted by a nonprofit that's growing fast even though fewer refugees are allowed into the U.S.

Pancakes, pizza, pajamas and The Grinch. That's how young Syrian refugees in Chicago are celebrating the holidays.

"We're not really sure where that came from, but we've got a lot of requests for pancakes, breakfast for dinner, so we're doing that."

The unique winter celebration is part of an after-school program hosted by a local nonprofit four times a week. The Syrian Community Network provides hundreds of recently arrived Syrian families with the tools to become self-sufficient in the U.S. And key to that mission is securing the future of the community's youngest members.

"These children if they are successful in school, if they are the next doctors, pharmacists, teachers, lawyers, this will be the success of all of Chicago."

At a typical after-school session, educators and volunteers manage two stations for the students: one for homework and reading practice and another for more playful activities such as art and science projects. But today, the goal is to make sure the kids have some holiday fun.

The students have all resettled in Chicago with their families within the last few years — fleeing Syria's ongoing civil war. That nine-year war has killed over half a million and displaced nearly 13 million people. As a result, a quarter of all global refugees come from Syria.

However, the U.S. resettled less than 700 of them in the past two years combined — way down from the 15,000 Syrian refugees it welcomed in 2016. That's in line with President Donald Trump's unprecedented cuts to the U.S. refugee resettlement program. Those cuts have led over a hundred refugee resettlement offices to close or downsize. But the five-year-old Syrian Community Network is actually growing.

"We've gone in staff, we've grown in the size of our space. Our budget has grown."

The organization's founder and CEO says that's in part thanks to its mission to assist refugees beyond their first couple years in the U.S. To achieve that, the Syrian Community Network offers, among other things, language classes, job training, driver education, rental assistance, and immigration services.

"When people first arrive, and they resettle, people are excited, and they want to help them. But then all of a sudden, a refugee family will find themselves very lonely, isolated from the rest of the community, because all of those volunteers who were excited and happy to serve them are now gone. But then eventually after those first two years, now is when the real work starts."

Another factor, she says, is public empathy for the plight of Syrians. In 2014, the U.N. called the Syrian refugee crisis the "biggest humanitarian emergency of our era."

"So people are still very sympathetic to Syrian refugees who are displaced and who have faced this war. I think that kind of gives us an edge."

The organization's education director says her students' desire to be part of a community is a universal feeling.

"We forget that these students are just like any other students in Chicago. You know, as a parent, I hope that someday my child has a program like this where there is true community."