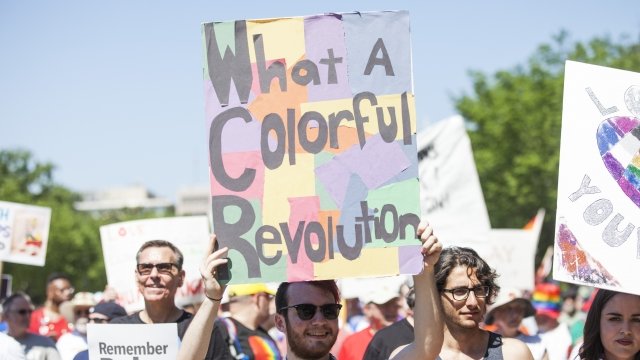 President Donald Trump's Supreme Court nominee Judge Brett Kavanaugh faces a long confirmation battle. Kavanaugh is more conservative than Justice Anthony Kennedy, and some activists are worried that he may overturn gay rights legislation that has been authored by Kennedy.

None of Kavanaugh's court opinions dealt with LGBTQ issues, so we don't really know how he'll decide. Kavanaugh's support of an expansive presidential power may have consequences, considering the president's decision to ban most transgender people from the military.

During his 30 years as a Supreme Court justice, Kennedy ruled on a number of cases that involved the LGBTQ community. We look back on four key decisions that shaped gay rights as we know them today.

The 51 year-old Kennedy was sworn in on Feb. 18, 1988, by then-President Ronald Reagan. Kennedy, a lifelong Republican, is often viewed as a moderate when compared to the other justices. He played a pivotal swing vote in various cases.

In 1996, Romer v. Evans became the first landmark case for gay rights. Kennedy authored the opinion of the court that protected gays, lesbians and bisexuals under the equal protection clause of the 14th Amendment. The court ruled that states cannot create amendments or laws that discriminate.

Kennedy said in an opinion announcement: "We must conclude that Amendment 2 classifies homosexuals not to further a proper legislative end but to make them unequal to everyone else. This Colorado cannot do. A state cannot so deem a class of persons a stranger to its laws."

In 2003, Lawrence v. Texas struck down a Texas statute that criminalized sex with someone of the same gender. Kennedy again wrote the majority opinion.

He said: "The petitioners are entitled to respect for their private lives. The state cannot demean their existence or control their destiny by making their private sexual conduct a crime. Their right to liberty under the due process clause gives them the full right to engage in their conduct without intervention of the government."

That decision legalized gay sexual conduct in the U.S., and it invalidated sodomy laws in 13 other states.

In 2013, United States v. Windsor struck down section 3 of the Defense of Marriage Act, or DOMA, that defined marriage as a union between a man and a woman.

In 2015, the landmark case Obergefell v. Hodges guaranteed same-sex marriage protection under the 14th Amendment. Kennedy wrote the majority opinion, part of which is often quoted at same-sex weddings:

"No union is more profound than marriage, for it embodies the highest ideals of love, fidelity, devotion, sacrifice and family. In forming a marital union, two people become something greater than they once were, and it would misunderstand petitioners to say that they disrespect or diminish the idea of marriage in these cases."

But not every Kennedy decision was a win for gay rights. In 2000, Kennedy voted with four other justices to uphold the ban on gays becoming Boy Scout masters. And in a recent case, Kennedy sided with a baker who didn't want to bake a wedding cake for a same-sex couple because it violated the baker's religious belief.

In the majority opinion, Kennedy reaffirmed gay rights protections. He wrote, “These disputes must be resolved with tolerance, without undue disrespect to sincere religious beliefs, and without subjecting gay persons to indignities when they seek goods and services in an open market.”

Despite that, Kennedy's legacy plays a significant part in gay rights today. Before Kennedy became a justice, same-sex intimacy was illegal. Today, same-sex couples can marry. According to Politico, a counsel and director of Lambda Legal’s marriage project says, "It's impossible to overstate his importance [to the gay rights movement]. [Kennedy] will be remembered for these decisions perhaps more than any other."