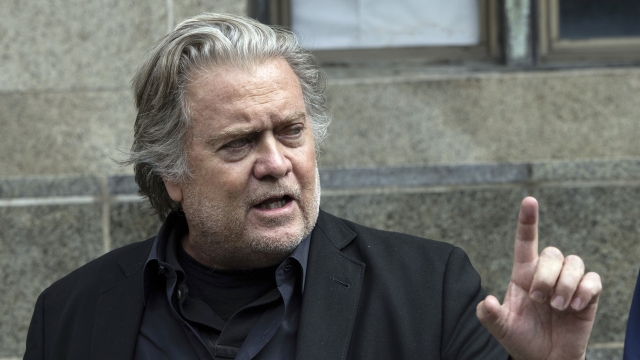 Trump's top political adviser's time in the White House was short-lived. But his political influence endured.

He's been called the most dangerous political operative in the U.S., the MAGA mastermind, the manipulator-in-chief. Although Steve Bannon has never held an elected office, his influence on modern conservatism has been seismic.

"I think that he has introduced a methodological recklessness to the American right in particular, and perhaps the global right in general," author Benjamin R. Teitelbaum said.

But his path to alt-right stardom wasn't a straight line.

Bannon grew up in a Democrat, working-class home in Virginia. He served in the Navy for seven years and has said his time in the military is what made him a "Reaganite."

He later became an investment banker for Goldman Sachs and financed and produced several films.

In 2004, while working on a documentary about Ronald Reagan, Bannon met Andrew Breitbart, who had published a book about the former president. The two went on to found the far-right media company Breitbart News.

Bannon described Breitbart as anti-establishment and anti-permanent political class. That translated to his strategy as chief executive officer of Donald Trump's 2016 presidential campaign.

Bannon followed Trump to the White House, serving as his top political adviser. He pushed controversial policies like the ban on travel from seven Muslim-majority countries and leaving the Paris Climate Agreement.

But his relationship with Trump wasn't a match made in heaven.

Steve Bannon Gets 4 Months Behind Bars For Defying Jan. 6 Subpoena

Lawyers for the longtime ally of former President Donald Trump argued their client deserved a sentence of probation.

"Their personalities did not, in fact, mesh very well. They were two loud, egotistical, suck up all the air in the room types of people," Teitelbaum said. "Bannon thought he was the brains and Trump was the tool, right? He was the mind and Trump was the muscle."

Bannon's time in the White House was short-lived, lasting less than a year. But his political influence endured and by the end of Trump's presidency, Bannon found himself back in Trump's inner circle and wound up at the center of the Jan. 6 investigation.

Bannon refused to testify before the Jan. 6 Committee, landing him a federal conviction for contempt of Congress.

And Bannon is also facing charges for money laundering and conspiracy, which could lead to a separate prison stint, potentially cutting him off from his media base.

"At a certain point, if he were to be completely silenced, if there was a complete blackout from Bannon — communications and messaging — his followers will eventually forget about him. Six months, I don't think would do it. Six years, three years, two years, I don't know," Teitelbaum said.